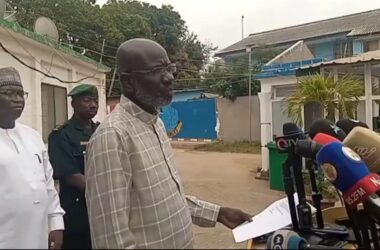 We hereby share, verbatim, the statement of the National Security Adviser (NSA), Mr. Abubakarr Suleiman Jeng delivered during the media briefing on Thursday, 29th December, 2022 at 2:00pm GMT at the Army’s Defence Headquarters in Banjul.

Members of the Press and Media Houses,

Members of the National Security Council here represented by:

The Chief of Defence Staff

The Inspector General of Police and

Following the unfortunate and regrettable alleged coup plot to overthrow the democratically elected Government of the Republic of The Gambia, this press briefing is conducted to provide situational update and information to The Gambian citizens and residents on the current security situation, the actions taken by The Gambia Government and ongoing steps regarding the botched coup attempt, which indeed is a concerning national security matter of immense implications.

Additionally, two (2) more Gambia Armed Forces officers linked to the alleged coup plot were subsequently arrested. They are Second Lieutenant Omar Colley from First Infantry Battalion, arrested on 24 December 2022 and Captain Ebrima Baldeh from the Military Intelligence at the Defence Headquarters in Banjul who was arrested on 25 December 2022. There is ongoing search for more suspected accomplices.

Meanwhile, it has been established that the alleged coup plotters made contacts and held clandestine meetings in some places identified within the country, as they were planning the unearthed coup plot. Also, reports are pointing to the suspected involvement of sponsors for the coup plot from civilian collaborators both within and outside of the country. The investigations are seriously looking into this angle.

In addition, an Operational Plan of the alleged plot detailing the outline of the botched plot is already in the hands of investigators.

The said plan shows the composition of the formations that were to participate, the required deployment strength, tasking, and positioning to forcefully takeover the State house and prevent any intervention with The Gambia Naval Base in Banjul as the launching platform with accomplices from the State Guard, Fajara barracks, Yundum barracks, and other battalions across the country.

In addition to the State House, the plan shows other key locations to be taken over and occupied which include the Denton Bridge, the Bund Road-Banjul Highway Intersection, Arch22, and installations such as NAWEC, Radio Stations, the Abuko Earth Station, the Airport and to seal off the EOCOMIG troops.

The coup plotters also intended to use media propaganda to promote their takeover, arrest Cabinet Ministers and senior government officials to use them as hostages to prevent any foreign intervention.

This brief so far provides insight into the plan and intentions of the allege plotters which could have had far reaching national security, peace, and development implications but for the timely intervention of the State in unearthing the alleged coup plot.

Consequently, in accordance with the laws of The Gambia and in line with international best practice, The Gambia Government has constituted a Joint Investigation Team (JIT) to investigate the alleged coup plot. The multi-sectoral JIT draws membership from the Ministry of Justice, Office of National Security, The Gambia Armed Forces, The Gambia Police Force and the State Intelligence Service to exhaustively, professionally and impartially investigate the alleged coup plot. Consistent with the due process of the law, the eleven (11) member JIT was sworn to an Oath of Secrecy administered by the Solicitor General, Ministry of Justice on 27 December 2022 and investigations has commenced.

The JIT has thirty (30) days effective 27 December 2022 to investigate, prepare and submit their report on the alleged coup plot. Following the completion of the investigations, the public will be informed accordingly of the outcome and the next cause of action.

In conclusion, I wish to use this occasion on behalf of the National Security Council and Security Services to encourage members of the Armed and Security Services as well as the public alike to be law abiding and more vigilant in safeguarding the peace, security, and stability of The Gambia always.

That said please allow me to at this point to say that due to the sensitive nature of the ongoing investigations, this will be all that can be shared today with a view of not comprising the process and any future course of actions, hence no questions can be entertained.

I thank you for attending this press briefing.

Office of The President