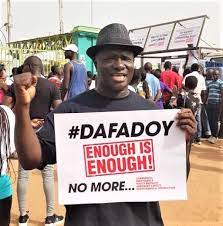 By all standards, Momodou Sabally of the UDP is currently a prisoner of conscience or a political prisoner as defined by Amnesty International as a person who is imprisoned or otherwise physically restricted solely because of his or her political views based on his or her conscientious beliefs. The audio attached here (https://fb.watch/hBKpR-d4x9/) is the material that the Police are relying upon to illegally arrest and detain Sabally. The Police went further to also invite the TikTokers who associated with Sabally to question them, which is also illegal because these TikTokers have a right to political beliefs and to express them.

Any society where there are political prisoners it means opinion is finally criminalized and the political space is either closed or closing. It means anyone is at risk of arrest and detention simply because you expressed an opinion that the Government does not like or disagrees with. Secondly where there are political prisoners, the next logical event is enforced disappearances, torture and extrajudicial executions. This is because when a government detains a person for his or her political, religious or other views and that person remains defiant, the government ends up keeping him in detention longer, and eventually to torture and kill that person. We have seen enough of that under the Tinpot Dictator Yaya Jammeh. Kanyiba Kanyi is a case in point!

This is why, as Gambians, we must be very alert to this situation even though we are aware of the profile of Momodou Sabally as a former key official of the Tinpot Dictator Yaya Jammeh, and now a leader in another political party, UDP. I do not have any association with Sabally and certainly he, like all other officials of the former regime, must be held accountable for his role in that APRC Tyranny. But the fact is Momodou Sabally is a human being and a citizen of this country in which he has rights and duties as granted by the Constitution. In that same Constitution, the Government of the Gambia has obligations to respect, protect and fulfill the rights of all citizens.

Therefore, the issue with Momodou Sabally should interest all Gambians regardless of any affiliation, love or hate for him. What is happening right now is that the Government has taken a deliberate step to infringe on his fundamental human rights as guaranteed by the Constitution. This action against Sabally is not new since it was done to other politicians and citizens before him since 2017. It is a clear case of suppressing the civil and political rights of Gambians hence silencing citizens with the intention to shield the Government from public scrutiny and accountability. For this reason, the time has come for all citizens to stand up and resist the creeping dictatorship, if not here already.

But what is significantly frightening about Sabally’s case is that the Government has detained him longer than any other person without charge. Secondly, the Government has gone to court to succeed in legalizing the illegal detention of the man which has never happened since 2017. This means Barrow’s Government is learning lessons from the Dictatorship in order to legalize its oppression of citizens. During Yaya Jammeh’s regime, people were made to disappear or arbitrarily detained beyond what the Constitution permits, i.e. 72 hours, just like that. Jammeh would not seek any court order to keep one under detention because he was notorious for violating the Constitution, with impunity. This is what happened to Kanyiba Kanyi. We must not allow Momodou Sabally to become the ‘new’ Kanyiba Kanyi of today.

Instead, today Barrow decides to use the courts instead of arbitrarily detaining a person so that it will be seen as a lawful action. The similarity with Jammeh is that we are now also seeing the emergence of mercenary judges just that this time the judges are Gambians. No judge of sound legal competence should have allowed Sabally to be further detained. If the judge had listened to the audio in the center of this matter, she would have freed Sabally instantly and seriously warn the IGP not to touch anyone again for such expressions. This is because what Sabally said in that audio is absolutely constitutional, legal and non-violent. There is absolutely no justification to arrest him, much more detain him.

Therefore, Gambians, we have entered a new phase in our political life where the current Government has perfected the malpractices of the Dictatorship in trampling upon our rights. It is for this reason that all citizens must stand up in solidarity with Momodou Sabally realizing that if this malpractice remains then no other citizen is ever safe for the opinion you might express one day. This is even more telling for politicians, civil society actors, journalists, researchers, clergy, musicians, comedians, academicians and pundits. This is because these are the people who research, collect, manage, analyze and share information as data, opinion, entertainment, sermon, or knowledge in the public space as part of their job.

Therefore, if you are a politician like Sabally, or a journalist, or a civil society advocate, or academician, imam, preacher, comedian, musician, or a researcher or a pundit, raise your voice now and demand the Government to withdraw by releasing Sabally right now, and furthermore, to refrain from such tyrannical actions. Defending Sabally means you are defending yourself and your profession.

Let us not allow the Government to hide behind legal and democratic processes to subvert democracy and our rights. For that matter, I wish to call on the Chief Justice Hassan Jallow to be conscious of Government manipulation and not allow the Judiciary to be once again used to oppress Gambians. The Judiciary is mandated to deliver justice and not to aid and abet injustice.

As citizens let us stand up and speak out to end this culture of abuse which has been creeping back into this country since 2017. One of the most glaring manifestations of dictatorship is the presence of prisoners of conscience and political prisoners. Anywhere there are prisoners of conscience then rest assured that no citizen is ever safe in that country. Defend the Republic and the Constitution.