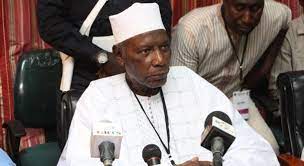 The leaders of the United Democratic Party (UDP) Lawyer Ousainou Abubacarr NK Darboe and Mr. Mai Ahmed Fatty of Gambia Moral Congress (GMC), today 1st November 2021 tendered their nomination credentials to the Independent Electoral Commission (IEC) for the 4th December 20201 polls. The candidate for All People’s Party (APP), Mr. Biram Jagne has notified IEC of his withdrawal from the race.

Mr. Darboe was accompanied by an overwhelming crowd to the election house where he submitted his nomination application.

The Chairman of the Independent Electoral Commission expresses delight in accepting the nomination papers but informs Mr. Darboe that his application will be subjected to public scrutiny on November 6th 2021.

Meanwhile, Dr. Biram Jagne of All People Party marched to the Election House and submitted his withdrawal from the December polls.

Mr. Mai Ahmad Fatty the leader for Gambia Moral Congress ends strong waves of energised communicative ideas by indicating that this year’s elections is not about crowd, fame or wealth but instead battle of ideas, intellect and policies that will uplift the ordinary Gambians from poverty. The charming GMC leader added that health care and the security dilemma Gambians are faced with and how to inject hope and expedite the development trajectories of the Gambia.

The GMC candidate, however, stated that the memorandum of Understanding (MOU) that was signed between parties still needs more work but as of now what matters is he is the candidate for the GMC party.