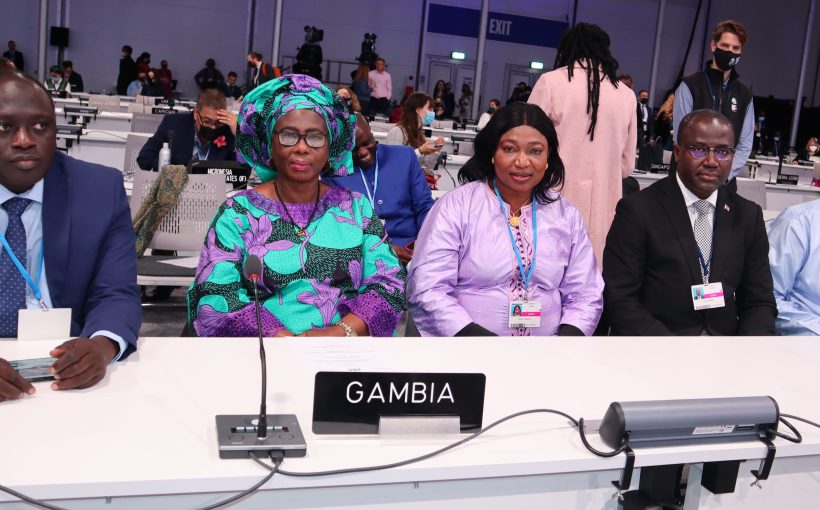 On 31st October 2021, Vice President Dr. Isatou Touray on behalf of the government of the Gambia addresses Twenty Six Session Conference of Parties of UNFCCC (COP 26), which took place in Glasgow, United Kingdom, from 31 October to12 November 2021.

Excellencies, distinguished delegates, on behalf of His Excellency Mr. Adama Barrow, President of the Republic of the Gambia, I wish to extend my sincere gratitude and appreciation to the Prime Minister and the government and people of the United Kingdom for hosting COP26 amidst COVID-19.

We must build on the enthusiasm shown by world leaders in 2015. The realities of climate change have gone beyond doubt and debate.The most vulnerable countries are bearing the brunt of its impact.

In the Gambia, two recent wind storms occurred in July and September 2021 causing terrible destruction to properties and claimed many innocent lives.  In addition to the storms, disruptions in rainfall at the beginning of this year’s rainy season resulted in delayed planting of vital crops in many areas in the country.

In 2014 we asked the following questions:

These questions in my view still remain unanswered. Nationally Determined Contributions (NDCs) and other commitments to the Paris Agreement are not sufficient enough to limit global temperature rise to 1.50C.  Certainly not enough to protect the lives of vulnerable communities in many developing countries around the world!

As developing nations, I believe that we are doing more than our fair share in combating global warming.  The Gambia even though a small developing country in sub-Sahara Africa do recognize the severity of climate change, and never became hesitant to ratify the Paris Agreement and submitted her first and second NDCs in addition to the 2050 climate vision.

The Gambia’s updated NDC is recognized by Climate Action Tracker as a fundamental commitment to reducing global temperature rise to1.50C above business as usual by 2050.On behalf of Government, I would like to thank UNDP, IRENA and ICLEI for contributing financially and technically to the updating process of the NDC.

My country firmly believes that other governments, particularly the world’s rich and developed countries, should do more and honour their past pledges to meet the unquestionable and dire needs of the world’s poorest and most climate vulnerable people, especially those with the least resilience who are put at the greatest risk from an ever-changing and unpredictable climate.

I and my delegation, expect nothing less from COP26 than tangible commitments that strengthen emission reduction targets to be consistent with1.5°C and reflect each country’s fair share of the global effort.

Without additional finances, investments in new technologies and strong capacities, my country will find it extremely difficult to implement our ambitious climate action plan.

We must not leave Glasgow without a robust and effective rule set for the Paris Agreement and this includes:a post-2025 climate finance goal; ensure support to address loss and damage as well as recognize the special needs and circumstances of the LDCs. Let’s remember that our lives and livelihoods depend on the decisions we will make here in Glasgow. The time to act is now!

I thank you all!