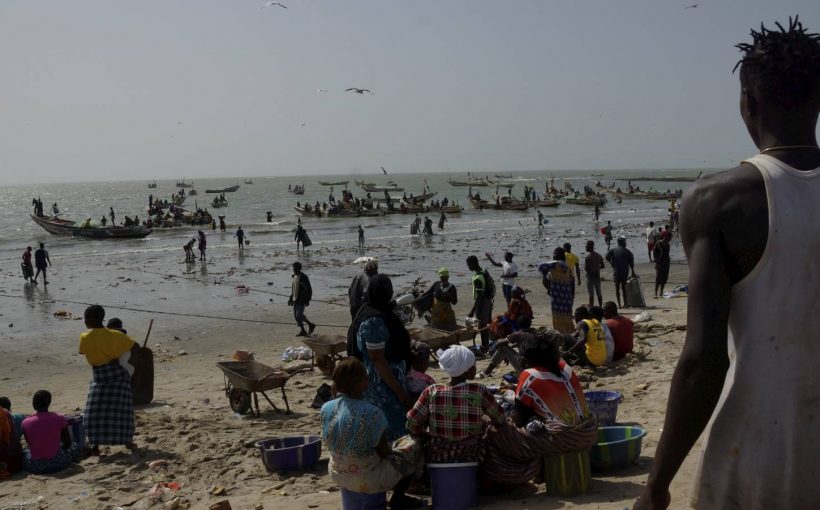 European Immigration policy makers believe they are fighting an organised crime syndicate that is responsible for smuggling thousands of migrants from West Africa to the Canary Islands. The trade, as European believes, generates billions of Euros for these criminal groups and associates.

Well that is not the belief of Tanji, Bakau, Mbour and Ndar  youth, for them the trips are just mere opportunities for youth to travel and look for greener pastures and feed their families back home.

A well documented research by Journalists Fabakary B. Ceesay and Alex Rietman, in the Gambia and Senegal, funded by Journalism fund.eu and Money Trail, unveils a different side to the story.

The fishing town of Tanji in the Gambia lies 1700 kilometres from the Canary Islands. There is a boat departure point for the Canary Islands known as “shulphure” always swamped by fishermen of different West African nationalities.

“When they find out that a boat with migrants is leaving, the police will mount a patrol along the sea coast but here money talks. Just give out a little and you are free to go”, said three friends anxious to jump onboard any boat bound for Spain.

Alagie Jallow 21, Lamin Fofana 20 and Yaya Demba 18 years old, are friends dreaming of traveling to Europe via Canary Islands, the only choice available and affordable to them.”If we see a boat going to Spain from this beach now, we wouldn’t be afraid to jump on board. All three of us wanted to go”, said Alagie.

The three friends are very aware of the dangers of the journey, but they are not scared of the rough sea just like many natives of Tanji Town. News of deaths of friends and loved ones wouldn’t deter them from taking the dangerous journey.

“You can’t find any work here and more frustrating as an adult is to see your parents struggling to feed you and your siblings”, said Yaya. Both Lamin and Yaya are school dropouts due to economic hardships.

Accompanying the three youth was Mr. Lamin Jarju 45, an experienced seaman with verse knowledge in sailing with different trawlers and fishing boats. Mr. Jarju knew the three youths but his advice wouldn’t stop them from taking the risk to Europe. “If Europeans close their front doors, we will take the back door”. Since we cannot get their visa we will take the backway”.

Jarjue said the trip organisers are natives and live within the community of Tanji and other Gambian towns and Villages.  “Anyone can be an organiser or an agent, as they are called here. These are often fishermen and Captains from here and clients are mostly from towns and villages within the country”, said Jarjue.

Most of the time someone has his own boat, looks for an experienced captain and a good navigator which are both easy to find along the Tanji fishing port. Now the recruitment is done secretly with proper care, since the police frequently patrol the coastline during the traveling season of August to November.

For the Tanji youth, migration is not a crime and the organisers are not criminals but ordinary fishermen and relatives from the same community. Families can approach a Captain or boat owner for help. “Families can pay up to 600 Euros for this trip, said Jarjue.

Drum beats and sounds in traditional African tunes filled the small compartment of a drum factory where several youth in Bakau hung out to learn a trade of drum making and drumming.

Bakau has a beautiful and attractive beach for tourists from Scandinavia but also a fishing port. Many youth made incomes from visiting tourists and were also involved in fishing and artist work.

Last year around the end of November, dozens of friends left Bakau for Spain and it was a successful trip as videos of the journey were sent back home upon safe arrival in Spain.

“We can stop this clandestine migration if Europeans channeled the monies given to our governments directly to the youth to implement projects by themselves. Government officials don’t care about us”, says General Nagga.

Nagga is his known nick name and Naatangeh another youth corroborated with him.

“Let the funds come directly to us; we will implement projects that we know can generate income for us here. Our political leaders have no serious direction for the development of the youth of this country, lamented Naatangeh.

He once lived in Europe and knew the hardship encountered by many emigrants due to lack of skill. “We can do it here if the funds spent on the so-called war on migration is given to us to implement it ourselves”, Naatangeh stated.

General Nagga has an uncle, a seasoned retired seaman from a traditional bloodline of fishermen, who have previously organised boat trips to Spain from Bakau. He is a genius and God always blesses his trips”, said Nagga.

Mr. Bubacarr Fatty, head of research at the Management Development Institute (MDI) the Gambia said families appreciate efforts of this trip organisers and are highly regarded in the society. “They made lots of significant financial impacts on families and society at large, ” said Fatty.