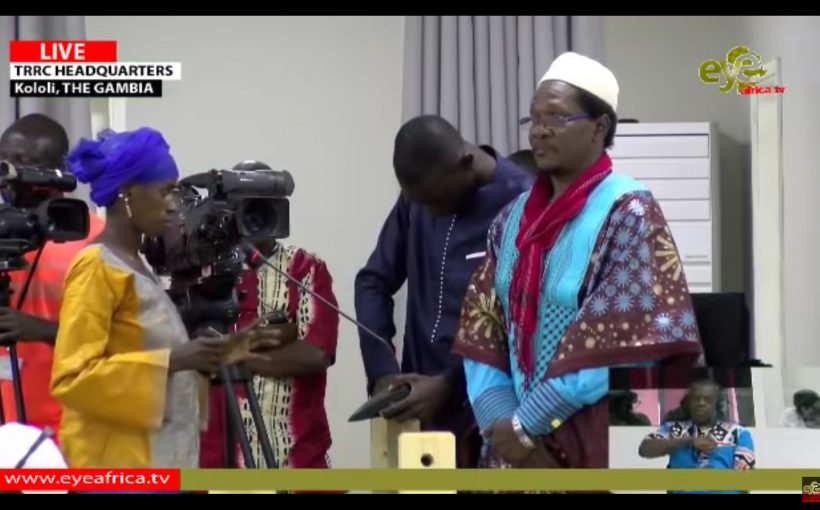 Back in January 1995 an eighteen-year-old lactating mother, Holo Bah, was shot by Orderly’s of Armed Forces Provisional Council (AFPRC) Vice Chairperson, Sanna Sabally. Barely a year after the coup which ushered in a 22-year long Dictatorship, Ms Bah had nowhere to turn to. Besides Point Newspaper which published her story, she had to wait for twenty-four years to finally confront her alleged perpetrator. However, her compensation request for D1 Million Dalasis was met with condemnation from the general public. This article highlights the importance of an empathic public in helping victims recover and most importantly helping the country achieve the Truth, Reconciliation and Reparations Commission’s (TRRC) “Never Again” slogan.

At Mr . Sabally’s TRRC hearing held on 24th April 2019, Lead Counsel Essa Faal questioned then APRC Vice-Chairperson Sanna Sabally, about a “woman who was shot by members of your convoy. Holo Bah Shot at the Brikama Serrekunda highway.” At first, Mr Sabally claimed he was at Mile 2 on the date of the alleged shooting, however, he conceded that “if my guards would stand and say they did it. Yes, I will confirm it then”.

“Eighteen-year-old Holo Bah a lactating mother is claiming a compensation of D1 Million Dalasis for trespass on her person. Injuries stress and shock caused to her on Saturday the 25th of January 1995 as a result of gunshots fired by soldiers who were members of the convoy or escort of former vice-chairman of the AFPRC, Sanna B. Sabally.”

“Holo Bah who called yesterday to the Point Offices accompanied by her Uncle Amadou Sowe disclosed that she was selling potatoes at the open-air Latrikunda Sabajie Market by the Serrekunda Brikama highway when a bullet fired at a vehicle by members of the escorts of former vice-chairman Sabally hit her and was lodged in the soft tissue of her right arm.”

In response to this Mr. Sabally confirmed that he did travel with his convoy to Brikama on 25th January “for the christening of my son”. According to Mr. Sabally, there was a shooting incident on that day when a taxi obstructed their path on his way to Brikama.

In an unexpected turn of events Lead Counsel, Essa Faal asked M.r Sabally “to apologise to” Ms Bah, which he duly obliged to. Unknown to onlookers Ms Bah was actually in the audience. After a few minutes of organising Ms Bah came face to face with her alleged perpetrator in front of the cameras. Mr. Sabally apologised to Ms Bah in Fula saying “even if this thing happened to you and my bodyguards did this to you am appealing to you and am begging you to forgive me”.

This prompted a response from Ms. Bah requested compensation for her Uncle who had to sell his land and property to pay for her treatment. According to Ms. Bah “If he can also help me to get something to do where I can earn a living. Whereby I can solve my own problems for myself. On that note, I can forgive him forever. But without that payment, I will not forgive him.”

Counsel Faal then took control of the proceedings to advise the “witness that she [Ms Bah] should talk to the victim support unit [to] explain the law to her with regards to reparations.” Gainako raised questions to the TRRC on the progress of follow-up consultation talks recommended by Lead Counsel Essa Faal and received this response from Vice Chairperson Adelaide Sosseh.

“The TRRC is in the process of assessing complaints and at this stage, we are not in a position to answer any question related to victims claims. I hope that people respect this and allow us to finish our work.”

Efforts to make contact with Ms Holo Bah were also not successful.

Ms Bah’s compensation request of D1 Million was widely condemned by the general public which opined that she shouldn’t have placed a condition of payment before forgiving Mr Sabally. It’s worth highlighting that Ms Bah has had suffered for over 26 years now without any redress. This shooting has changed her life and robbed her off her independence and dignity which is very difficult to value.

Mr Williamsson who describes himself as a “clinical social counsellor and therapist” stressed that “all I say would only be based on my opinion and regarding this case, it might help or in worst case add to the suffering Ms Holo Bah is already suffering”.

According to him the Gambia is “a poverty-stricken country where D1 Million sounds like a lot of money, but depending on how the crimes committed have affected the victims, as you put it, it is approximately D3,000 per month, and if one loses everything one has and the capacity to provide for oneself D3,000 Dalasis a month is not very much to survive on. We all know the difficult challenges people face trying to survive with that kind of money.”

Let us Show Empathy to Victims

I asked Mr Williamsson what he made of the Public’s reaction towards Ms Bah and he explained that “there is not very much information, understanding and tolerance on mental health issues in general [in the Gambia], and much less so regarding a possible PTSD [Post Traumatic Stress Disorder] diagnosis. And again, there is no price tag for the suffering the victims have endured”.

He explained that “people might judge her for stating that in public, I was watching those hearings. But we need to remember that this is NOT a usual public gathering where we can expect the normal social codes and rules, but a hearing of heinous crimes committed against Gambians that have led to unimaginable physical, mental, economic and social pain and sufferings for the victims.”

“I would urge the public to pass all their emotions through a filter, perspective and emotional base of empathy before they direct their opinions against the victims. Even if one might have moral and ethical thoughts about things, let us remember that we have not experienced the sufferings these people have lived through and the consequences thereof. Let us show empathy” he said.

For the Never Again slogan to be achieved it is clear that the Victims of Human Rights Violations during the previous regime and their preparations are integral. However, it’s also now apparent that the public has an important role to play in supporting victims of Human Rights abuses. To ensure that the entire country never returns back into the days of dictatorship victims need to be supported in restoring victim’s dignity. It’s a matter of human solidarity.