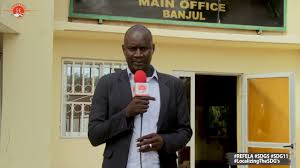 The deputy Mayor of Banjul Area Council, Mr. Omar B. J. Touray on Saturday 30th  November 2019, strong voice out his stand against what he described as ‘cheap citizenship’ as captured in the newly draft constitution. Mr. Touray was addressing the drafters of the Constitution as the Constitutional Commissioners begins their final phase of meeting and consulting with the people about the incoming constitution of the Gambia.

Deputy Touray vehemently calls for the removal of the section that allows children of non Gambian parents to become citizens by birth. He stressed that nationals from other ECOWAS States will invade the Gambia and within few years will outnumbered the entire Gambian population.

Touray demanded that, though he knew that section will be table before the National Assembly and subjected to a debate. He urged Parliamentarians to be careful when debating on that section of the drafted constitution.