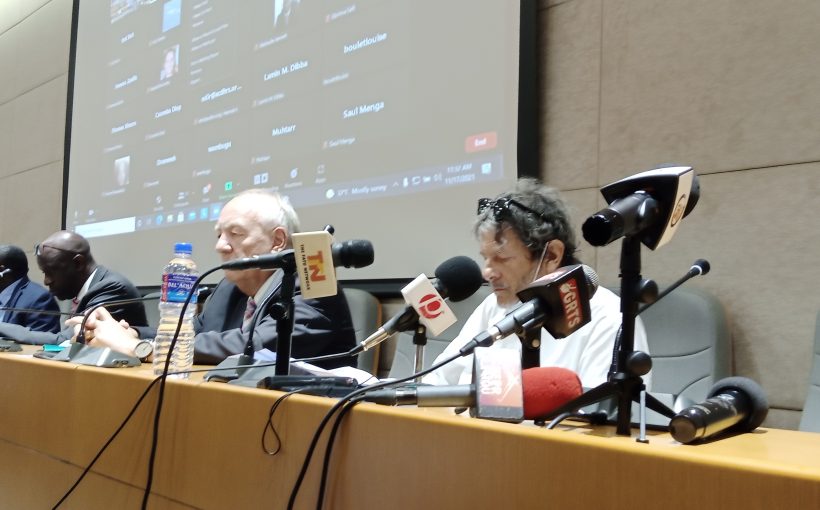 Lawyer Salieu Taal, president of the Gambia Bar Association Wednesday 17th November was among national and international delegates that converged at the Sir Dawda Kairaba Conference Hall to intensify calls for former Gambian president Yahya Jammeh to be brought to justice.

Mr. Taal of the Gambia Bar Association calls for the need of localization with the Gambia victims’ Centre approach and hybrid Court system as the only way to bring Jammeh to justice. He added that the Gambia’s legal system is not fit for such a purpose and is more designed to impose a dictator.

Mr. Taal further indicated that with the support from ECOWAS countries Jammeh can soon be brought to justice and urge Gambian political leaders to be willing to serve justice for Gambians  during the 22 years of dictatorship.

Reed Brody International Commission of Jurist made emphasis on the urgency for political will from Senegal, Ghana, Nigeria and Congo to bring Jammeh to justice like in the case of Hissène Habré, former Chadian dictator who was tried and imprisoned in Senegal. Dictator hunter Broody also recommends for a televised and live broadcasting of Court proceedings if Jammeh be tried.

Mr. Adama Dieng, Special Adviser to the Chief Prosecutor of International Criminal Court (ICC) said there is need for justice to be served in the Gambia or any affected country before a special Court or at ICC. Mr. said “justice must happen and justice will happen, for impunity is not an option”.

Stephen Rapp, the former United States Ambassador at Large for War Crime Issues and former Chief Prosecutor of the Special Court for Sierra Leone, recommends a combined National and International Court system. Mr. Rapp urged Gambians to mobilise funds for victims and witness protection during the trial of Jammeh and assured Gambians of his support.

Fatou Jagne Executive Director of Article 19 said the journey to bring Jammeh to justice will not be smooth and called on the government to investigate gross human right violations. Mrs. Jagne added that continued denials and protections mechanisms manifested by violators coupled with perpetrators continuing to hold high positions in public office is a clear testimony that the journey will not be smooth.

Tiawan Gongloe, President of the Liberia National Bar Association, and a survivor of torture stated that accountability is a question of political will and calls on Gambians to leverage on the upcoming elections to vote for candidates that promises accountability. He cited Liberia’s failure to uphold the political will after their two brutal civil wars and to implement the 2009 Truth Commission’s recommendation to establish an Extraordinary Criminal Court has prejudiced his country’s progress.

Sirra Ndow of the African Network against Extrajudicial Killings and Enforced Disappearances (ANEKED) expresses dismay for the Gambia government’s unfortunate and unfair decision to prolong the TRRC recommendations. “Some victims have passed away, others live with lifelong injuries while seeing those responsible for their pain living freely in communities’ ‘, says Ms. Ndow.

Mr. Emmanuel Daniel Joof, Chairperson of the National Human Rights Commission indicated that the recommendations by Truth, Reconciliation and Reparations Commission (TRRC) for the prosecution of abusive officials will be followed by a process of criminal accountability and his institution will do what it takes to address human rights violations.