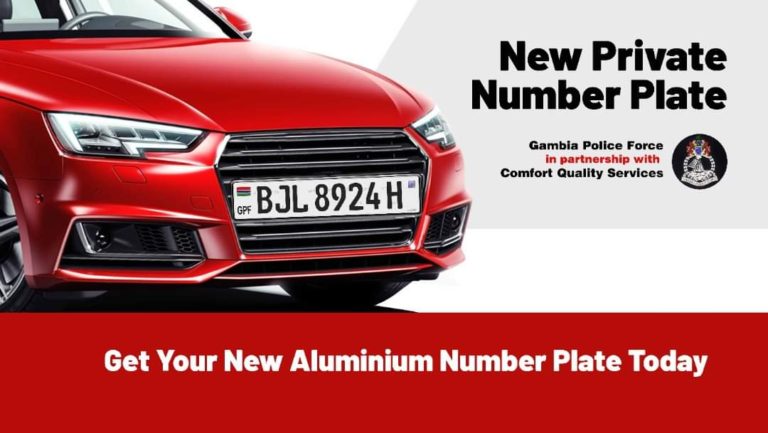 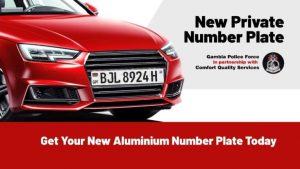 Comfort Quality Services (Comfort) has increased the price of personalised number plates from D10,000 to D11,500 against the Traffic Act which dictates that personalised number plates be priced at D2,500. According to the Motor Traffic Act, CAP. 70:03 provision 12A (1) “the licensing authority may issue a personalised identification plate for a fee of two thousand five hundred Dalasis [D2,500]”. However, Comfort has decided to ignore this law completely for the benefit of their business.

When our reporter questioned Comfort’s Operations Manager, Mr Ousman Njie about this violation he said “the personalised number plate I understand wasn’t issued at D2,500, the Police were issuing them for D5,000.  You have to remember before it was a buy and sell [and] the government was buying the number plates from someone to resell but this is a private company now.”

According to a press release from Comfort, the price increases will take effect from 26th April 2021. The release states that “a 15% Value Added Tax” has been added “on vehicle and motorcycle number plate payments” resulting in increased prices of Aluminium Number plates. However, Gainako’s investigation has discovered that the Aluminium Number plates are defective and of poor quality raising the question should the Public continue purchasing defective and poor-quality aluminium number plates?

The new prices of number plates are listed below.

The press release ended with this statement: “the Ministry of Interior and Gambia Police Force in partnership with Comfort Quality Services Ltd” are responsible “for the production of Aluminium Number Plates & QR code”.

Police Not in Control of Number Plates

To verify the price increases Gainako contacted Police Spokesperson Lamin Njie who referred us to “Comfort Quality Services, you can go to them and maybe they can give you updates about this because I think they have more information on this”. When asked if the Police are not in control of the Number Plates he said “it’s not like we are in control of the number plates because this is a contract between the Government of the Gambia and Comfort Quality Services”.

When our reporter confronted Comfort’s Operation Manager about the lack of response from the Police, Mr Njie said “this is the problem of the police. You know we are contracted by the Ministry of Interior and we are working closely with the Police for the production side and they have received the supplementary contract where these VAT charges are and the Police spokesperson, I spoke to him to do the press release but it seems they are running away from the responsibility. The police said they cannot issue the release because the contract was signed between Comfort and the Ministry of Interior.”

Who Sets the Price of Number Plates?

When asked if Comfort sets the prices of number plates Mr Njie responded to say Comfort “cannot determine the price – the price increment is not coming from [Comfort], from what I understand the price was agreed between the Ministries of Interior and Finance because the government determines what they want to sell the number plates. On our contract, we have a specific price that we stated to be our offer in the tender process so that is what we are getting still”.

According to Mr Njie, “any question with regards to how much the number plates are sold the Ministries of Interior and Finance will be in a better position to answer that. [Comfort] wants to emphasize that we don’t determine the price.”

The press release from Comfort ends with a statement urging “all vehicle owners WITHOUT the Aluminium number [plates] — to change their old number plates with IMMEDIATE EFFECT”. However, Comfort is not an authority to impose any such demands on the Gambian Public. Worse still is the blatant corruption facing the Aluminium Number Plate project which is currently defective.

Having published a video investigation and a detailed report on the Aluminium Number Plate project Gainako has identified a number of procurement malpractices surrounding the bid. The most bizarre decision by the Ministry of Interior was to award a five (5) years renewable tentative contract for a bid that required the awardee to supply 65,000 Aluminium Number Plates one month after award. Gainako has hand-delivered letters to the relevant authorities requesting a copy of the final contract without success.

Another noteworthy sign of corruption is that the 60% (Comfort) – 40% (Ministry of Interior) sales share on Number Plates sold was never part of the bid and not in any project documents reviewed by Gainako. Government contracts cannot be implemented on a gentleman’s agreement.

The roll-out of Aluminium Number Plates took place in early 2020 at the beginning of the Coronavirus (Covid-19) Pandemic when Police Officers started stopping vehicles without the new Aluminium Number Plates. However, the project was marred with numerous challenges. Some of the challenges reported saw customers make multiple payments for the same number plates, others were issued number plates without barcode stickers and most importantly the bar codes don’t feature the encryption features required in the bid.

The main reason for changing the Number Plates from Plastic to Aluminium was to create a digitised database of number plates in the Gambia with smart features such as an encrypted bar code which can only be read by authorised Security Personnel. The encrypted bar codes protect drivers details and make them difficult to duplicate. At the moment the bar codes being supplied by Comfort can be scanned with any smartphone equipped with a bar code scanner. This means that the number plates in circulation have no data protection.