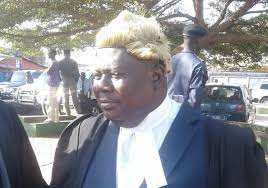 Lawyers Christopher E. Mene and Badou S. Conteh on Monday, 29th June, commenced a marathon “no case to answer” submission in the eight counts economic crimes against former managers of Gampetroleum Mr. Saihou Drammeh and Lamin Gassama, before Justice Haddy C. Roche of the Banjul High Court and urges Her Lordship to free the accused persons for prosecution has failure to establish a ‘prima facia’ case against the defendants.

In defending his submission, Mene said the records noted that all the witnesses without exception were vigorously cross-examined and the benefit of the evidence solicited from them under cross-examination enables the Court to assess the reliability of their evidence in chief. “Having assess the evidence, it is my submission, without any fear of contradiction, that the prosecution have woefully failed to establish a prima facie case against the accused persons to warrant calling upon them to defend themselves in this case”, said Mene.

Mene pointed out that section 268 of the Criminal Code under which the accuse are charged and the offence “conspiracy to commit economic crime” does not exist anywhere in the Criminal Code.  He said the offence of economic crime was created by a military decree and was amended by another decree before the coming in of the 1997 Constitution. He asserted that any provision of the decree which is in consistent with the Constitution is null and void to the level of its inconsistency.

Defence lawyer CE Mene stated that GP depot supervisor Lamin Touray testified before the Court and never made any allegations against the accused. He argued that  there is no absolute evidence that any of the products were received by either Saihou Drammeh and Lamin Gassama personally.

Mene said, “The particulars of each of these offences have to be proved and any evidence that goes at variance with the particulars go to no issue. It is the position of the law that in every alleged offence the prosecution need to establish the crime and to establish that it is a normal practice and once that is established that it is normal, the fraudulent intent is neutralised. Unless both are established in respect of each of the eight counts, the accused persons cannot be called upon to open their defence in respect to each of the counts”, Mene argued

Arguing in regards to the economic crime charges, that the evidence adduced by the witnesses are integral. He stated that their  evidences demonstrated clearly that both accused persons are not directly or personally involved in the loading or uplifting of trucks at GP so the issue of intent against them cannot be substantiated in anyway. He stressed that there is no evidence before the Court that Saihou Drammeh and Lamin Gassama are directly or personally involved in the uplifting or loading of trucks belonging to the Oil Marketing Companies (OMCs). Mr. Mene said the only evidence established was that several people other than the accused persons are involved in the loading of the trucks.

Mene pointed out that witnesses Lamin Touray the GP depot supervisor and Ousman Bah GP Control Room supervisor, loading day supervisor who physically load the trucks, the Finance Department that monitored and ensured payments are done, the reception area where all loaded tickets are photocopied, the security of Gam Petroleum, the Customs to ensure that duties are paid and paramilitary officers stationed at the gate to secure the entire facility. He added that there is evidence before the Court that even loaded trucks meant for outside country supplies are recorded.

“All the evidence that was led by the prosecution witnesses demonstrated all the uplift at GP are recorded and it passes through many stages. None of the prosecution witnesses have testified that the accused persons have done anything different than what has been in practice at Gam Petroleum for so many years. Almost all the documented evidence on the uplifts of fuel from Gam Petroleum for the relevant period that were tendered by the prosecution showed that they were signed, endorsed and approved by persons employed by GP other than Saihou Drammeh and Lamin Gassama”, said Mene.

Lawyer Mene said all petroleum uplifts were tendered through witness Ousman Bah, a depot supervisor and 99% were endorsed or approved by other officials. He indicated that the system at GP is automated and needs involvement of depot supervisors, the accounts, the customs, the security and others before one can make any petroleum uplift. He said, “In this matter, you cannot take a litre without passing through these processes. If those other people are innocent then the accused persons are innocent ass well”.

Lawyer Mene pointed out that most of the prosecution witnesses have stated before the Court that the accused persons are most of the times not at office. He added that the philosophy of the prosecution’s case was encapsulated on sentiments carried by the Chairman of the GP Board and the mere fact that Saihou Drammeh was the General Manager and Lamin Gassama as Operations Manager are responsible. “All evidence before this Court are hearsay upon hearsay”. Mene also argued that there is evidence before the Court that missing stocks at GP are inherited by the accused persons and there was a recommendation from stakeholders to carry out a forensic audit before the traders are paid. He added that prosecution witness Amadou Keita said it was the GP Board Chairman that informed them at a meeting about missing stocks at the GP facility.

Lawyer Mene said prosecution witness Momodou Hydara from Jah Oil explained before the Court the rationale for allowing local Oil Marketing Companies to uplift fuel on negative balances to ensure a level playing ground for all businesses because GP had a limited capacity. Mene asserted that all the OMCs and the GP Board said uplifting in the negative is normal so the missing stock cannot be attributed to the accused persons in which there is no forensic audit.

Going further, lawyer Mene argued that the case of prosecution was based on the negative balances which the OMCs took or the missing stock which cannot be attributed to the accused persons. He stated that it is the duty of the prosecution to attach the two elements of economic crimes. “I wish to submit that the prosecution has the responsibility to lay evidence to establish monetary loss to the Government of the Gambia caused by the acts of the accused persons but not by venturing into vague concepts of operational responsibility,” Mene said.

He submitted that none of the prosecution witnesses have adduced or shown such facts before the Court. He alleged that the overwhelming evidence is that the OMCs were furious when they were called to the Police Headquarters about their negative balances which is normal. “The evidence before the Court is that all the OMCs that were in the negative balances were ready to pay and now some of the OMCs are taken to Court by GP. How can you say there was loss as a result of what was supplied to the OMCs?To what extent is the loss? The prosecution did not lay any evidence to show if they have recovered anything or not” Mene said.

Lawyer Mene said both PURA and the Police investigators recommended for forensic audit to be carried out on the GP facility before any payment can be made to the international traders who supply them fuel. He added that Lamin Gassama has also warned the Board Chairman not to pay the traders because they were over paying them.“They charged the accused persons for monies they over paid to international traders. If any body is to take responsibility for the payment to the traders, it is the GP Board who agreed to pay without forensic audit against the advice of PURA, Police investigators and ignored the advice of Lamin Gassama to withhold the payment because the international traders were claiming monies they are not entitle to. That is the economic crime if any from the evidence” Mene said.

Lawyer Mene alleged that there was special interest from the GP Board in the settlement of the international traders where higher prices were used in terms of price and volume and witness Abdourahman Baro a board member of GP had a special interest in the matter. Lawyer Mene said  Abdourahman Baro and Ebrima Ndiaye, both GP board members and directors of Star Oil went to GP to negotiate the settlement agreement on behalf of Trafigura. He added that Trafigura, like other international traders have their agents at GP who they could have used for the negotiations. Mene said Ndiaye does not attend board meetings but when this matter came up, he was in the lead with Abdourahman Baro to negotiate for the settlement.

Lawyer Mene said the arrest and prosecution of the accused persons was designed and orchestrated. He said Abdourahman Baro have testified that they were interested in the position of Lamin Gassama to take control of the operations at GP. He added that the method used in getting Saihou Drammeh and Lamin Gassma behind bars could be best described as a coup. He explained that they wanted to get Gassama out of office because he understands operational matters and he won’t allow over payments.

Further arguing, Lawyer Mene accused prosecution witnesses Mr. Abdoulie Tambadou, the Board Chairman of GP and Mr. Abdourahman Baro, a Board member of GP and Director of Star Oil Gambia, as liars and accused them of deceiving the Court. He said the testimony of the two witnesses was contrary to the evidence before the Court and stated that their evidence was that payments to the traders were done fully in monetary terms and receipts were provided. However, Lawyer  Mene said Abdoulie Tambadou said there was reconstruction in the payment while Abdourahman Baro said there was deductions. “There was no reconstruction or deduction anywhere. It seems obviously that the two witnesses came to this Court to tell lies,” Mene said.

Lawyer Mene pointed out that even if the monies were rightly paid to the international traders, there is no evidence of economic loss to the Government of the Gambia because all payments were made by GP and not the Government of the Gambia. He submitted that GP liquidated their investments and took loans from the bank to make the payment. He stated that the Ministry of Finance is a shareholder at GP and all it is entitled to is to receive dividends. He said GP’s money is GP’s money and it does not belong to the Ministry of Finance. He added that GP is a private company and its money remains the companie’s.

Lawyer Mene further submitted that said the fuel problem came about when the Government came up with a price structure in September 2021 for October 2021. He said the OMCs were not satisfied with this and they wrote two protest letters to the Government warning them of the potential dangers this has on the fuel supply chain. He said the price structure created a situation where the OMCs were not able to import fuel and therefore, could not replenish their negative balances.

Lawyer Mene said “Task force report blamed everyone including the Ministry of Finance, PURA, GP Board and the OMCs for the problem. “ Now how can you turn around and say Saihou Drammeh and Lamin Gassama are responsible . There was no economic loss and if there was any, you cannot attribute it to these two accused persons”

See next publication for continuation of the no case submission.