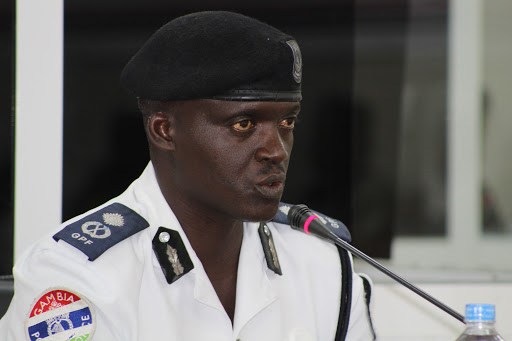 Deputy Police Commissioner of West Coast Region Mr. Ken Mendy of the Gambia Police force on 28th July 2020 testified before Magistrate Peter Adoh Nche of the Brikama Magistrates’ Court on the on-going criminal trial involving Muhammed Kanteh, the former operations Commander of West Coast Region and the Inspector General of Police.
Chief Superintendent Kanteh is standing trial on a single charge of official negligence.
Giving his testimony before a crowded Courtroom, Ken Mendy told the Court that he was informed by assistant Commissioner Buba Jassey (PW1) that the accused was going to Serrekunda to see his brothers, but he told Jassey to tell him not to go. Officer Mendy said the reason he asked Jassey for the accused not to go was due to the situation and the tension going on at the time and as a Police officer he could be attacked on the way.
Mendy said in his 27 years’ experience as a Police officer if an officer want to attend an event and he is on duty the said officer must informed his immediate supervisor for permission to go or not. Ken added that if the immediate supervisor can’t give permission he will forward the matter to another person above him.
Testifying further, Deputy Commissioner Mendy indicated that if permission is not granted that said officer has no right to go.
Prosecutor Sanneh asked him whether he knew if permission was granted in this case of not, he answered that he did not know. Ken Mendy adduced that Buba Jassey did not tell him whether he gave permission to the accused or not. Ken added that every Police station has a station diary which records the day to day occurrences at the station.
He indicated that if permission is granted for a police officer in a particular matter it should be recorded in the station diary but added that others does it without recording it in the diary. He added that it is not normal for a senior officer in the rank of chief superintendent to leave his station considering the situation on the ground without recording it in the station diary.
Testifying under cross examination by counsel Lamin. L. Darboe, Deputy Commissioner Mendy said he did not work in the same station with both prosecution witness Buba Jassey and accused person Kanteh. He stated that he was not at the Brikama station on that day and that he could not tell by the time he was talking to Jassey if the accused had already left the station or not.
He said assistant Commissioner Jassey called to inform him and he (Mendy) ordered that kanteh should not go. Counsel Darboe asked, “If you have ordered that the accused should not go, then why informing Commissioner Famara Jallow” Mendy responded that he was only informing his immediate boss who must be put in the picture due to the chain of command.
Counsel Darboe asked, “If you gave authority and ordered a junior officer, why not Jassey has the powers to give orders to Kanteh?” Mendy responded that was between Jassey and Kanteh and that he did not communicate with Kanteh. He accepted that as a senior officer if a subordinate inform him to give permission he can do it or informed other party as well. He added that if he can grant permission, he will and if he can’t he would forward it to his superior.
Counsel Darboe said, “Am putting it to you that in a normal chain of police command the accused have no other person to seek permission from apart from Mr. Jassey”. Mendy replied, “Yes that is correct”.
Further under cross examination by defence counsel Yankuba Darboe, Officer Mendy said what compelled him to asked Jassey to tell Kanteh not to go was due to the situation of tension at Kanifing. Ken asserted that the punishment or defying an order by a junior and a senior officer differs adding that a junior officer can be warned whiles the senior can be charge.
He further stated that when he saw the accused person on social media giving interview, he knew that his order was flouted. He added that at that time he did not do anything about it, instead he only informed his immediate boss.
Deputy Commissioner Ken Mendy said the penalty behind disobeying a senior officer and leaving a post without permission are the same. Counsel Darboe asked, “If that is the case, why only the accused person in the duck and not prosecution witness Assistant Commissioner Buba Jassey? Mendy responded that witness Jassey could be given disciplinary measures. He added that he only know about the measure taken against the accused person.
Going further witness Mendy said he made a statement to the Police in regard to the case but could not recall the date. He recognised the said statement in Court.
Counsel Darboe attempted to tender the witness’s statement before the Court, but was objected to by prosecutor Sanneh, claiming that the document was a photocopy and a proper foundation was not laid by the counsel. However counsel Darboe argued that the document is from the Court and was supply to them by the prosecution. He argued that if the prosecution want to help the Court they should have supply the court with the original copy.
Magistrate Nche ruled that the document is photocopy and secondary evidence and therefore reject it. He faults the counsel for not making an oral application to tender the document.
Continuing, Mendy said he could not recall asking Jassey for the accused to return the official car key, but that he only did that after receiving official information from the regional Commissioner Famara Jallow on 26th January 2020. He added that it was him that informed Commissioner Famara Jallow that the accused went with the official vehicle.
Witness Mendy said he was informed by Assistant Commissioner Buba Jassey that kanteh has left with the official vehicle on the day of the incident.
Hearing continues on 10th August 2020.