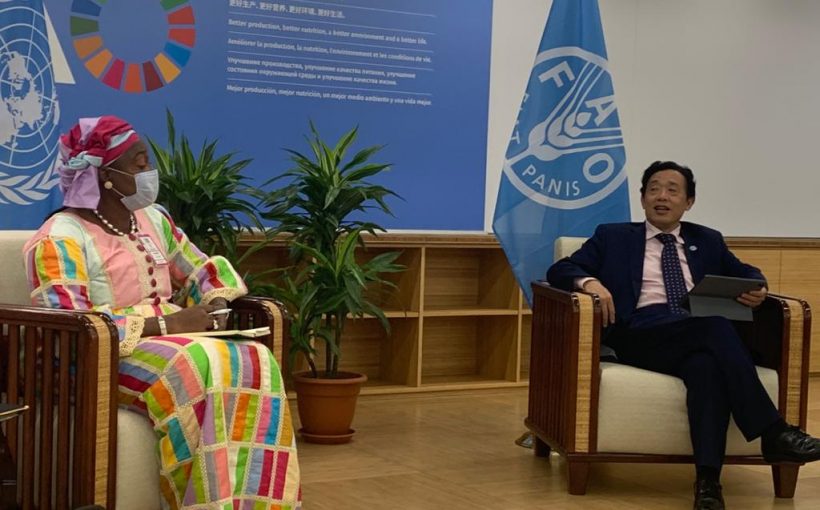 The Food and Agriculture Organisation (FAO) Director-General, QU Dongyu and Hon Amie Fabureh Minister for Agriculture of the Republic of the Gambia recently met in Rome, Italy and shared similar vision on how to collaborate further for the advancement of the Agricultural sub sector in the Gambia.

The meeting of Hon. Fabureh and FAO Director General came at the sideline of the minister’s visit to Rome to present the National pathway of the Gambia’s Food Systems at a pre-Summit of the United Nation’s Food System Submit from the 26-28th July 2021.

According to FAO website,The Gambia Minister shared ideas with director Dongyu on the country’s agricultural sector in The Gambia. The Minister and the Director-General shared views on the agriculture sector of the Gambia appealed to FAO Director General to support the country become more self-sufficient in terms of rice production. She pointed out that her Ministry’s top priorities were those of rice, millet and poultry production, given that these are key stable foods for the population. Hon Fabureh emphasized the need for innovation and technology to improve productivity, while noting the low investment received in this regard.

The Director-General appreciated the Minister’s vision, and shared his insights with her on how improved and hybrid crop varieties can achieve higher production needs. He noted that given the Gambia’s subtropical climate these varieties could be a viable solution for productivity concerns. The Director-General also agreed with the Minister that close attention to innovation and the creation of value-addition would be key for better productivity, as well as youth engagement in the sector. He assured the Minister of FAO’s continued support.