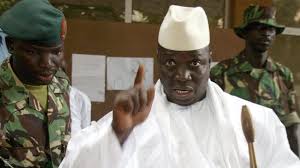 Information entrust to Trumpet Newspaper from a former Foreign Affairs diplomat of the Republic of the Gambia, has it that former president Yahya Jammeh personally poisoned the one timed head of his killer squad, late Captain Tumbul Tamba known as “Hell Manager” for allegedly misleading him (Jammeh) to commit crimes against several innocent people including his own family members and close associates, that he regretted for the rest of his life.

Out of regret, anger and vengeance, Jammeh decided to personally liquidate his former strong man and trusty by poisoning him at a dinner sometime in 2007.

According to our source, which asked for anonymity and also asked to conceal the name of the former foreign affairs official, said Yahya Jammeh at one evening invited Captain Tamba to a dinner at State House. The official indicated that the said dinner was personally requested by Jammeh to dine and wine with his notorious killer on the same table.

As for Tumbul, that dinner was an honour and winning the trust and confidence of Jammeh which he has always been yearning for. But it turn out that the dinner was designed to get rid of him secretly.

The source indicated that as the two were dinning, Jammeh pretended that he forget something inside and asked Tumbul to get it for him leaving Jammeh alone at the dinner table.

“Jammeh personally put a poisoned in the drink of Tumbul before he returned back to join Jammeh at the dinner. That poisoned came from Iran, it was brought by late Lieutenant Nfally Jabang”, the source alleged.

According to the source few days after the dinner, Tumbul Tamba got mysterious sickness and was admitted at the private VIP block of then RVTH and under a very painful and sad circumstance.

Going by the testimony of former body Guard Captain Saikou Jallow, when Tumbul got sick Jammeh never bothered to check on him or even provide proper medical care for him. He even turned down Jallow’s request to visit Tumbul at hospital before he die.

Tamba suffered before he died months later without Jammeh checking on him. Jammeh later told Jallow that Tumbul was a bad person who mislead him to commit several crimes against innocent people.

It could be recalled that shortly after the foiled 21 March 2006 coup plot, two prominent Gambian State Guard officers close to Jammeh died under mysterious circumstances.

Two of the dead, Major Musa Jammeh known as “Maliya Mungu” and Captain Tumbul Tamba aka “ Hell Manager” were known for inflicting horrendous pain on innocent people and perceived enemies of Yahya Jammeh.

Captain Tamba was the first to die, then Major Jammeh months later. Both Tamba and Jammeh, were Personal Protection Officers of former President Yahya Jammeh, had reportedly confessed to their crimes on their death bed before they finally kicked the bucket.