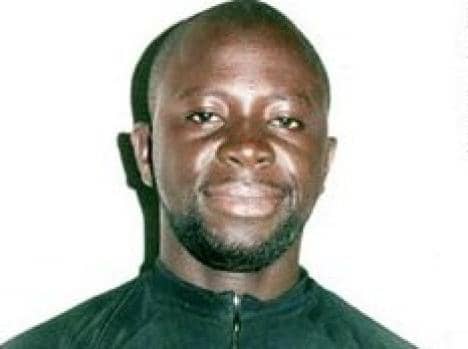 Information gathered from highly reliable sources that were present when the missing Journalist, Chief Ebrima Manneh died, revealed to Trumpet Newspaper that he died in the cabin of a Pick-up vehicle on the way to hospital, sometime in mid-2008.

Chief Manneh was been ferried to hospital in Diabugu Batapa from his detention at Sareh  Ngai Police Station, when he allegedly met his untimely death on the way.

The sources added that he was buried behind Diabugu Batapa Police Station adjacent to a latrine pit. Sources further alleged that before he was carried in to the waiting vehicle, he was slapped from behind by the then Governor of Upper River Region (URR), Omar Khan. Khan was said to be the one who provided the vehicle to take Manneh to hospital; but he “slapped” the sick Journalist shortly before he died.

According to our sources, while under detention at the border Village of Sareh Ngai, Wuli, Upper River Region (URR), Manneh suffered from physical, mental and psychological pains and stress. He was also reported to have suffered from back pain and muscle stiff. The witnesses indicated that, at one point, he was so sick that the security officers stationed at Sareh Ngai Police Station feared he would die, but no one dared to approach the authorities about his fate.

The sources stated that one officer had the courage to approach Governor Omar Khan to use his powers to authorise that Chief Manneh be taken for treatment before he dies, but it fell on deaf ears until at the last minute. The sources claimed that the said officer was rumoured to have hailed from the Town of Lamin, Kombo North, where Chief Manneh also hailed from.

These were the officers from sister forces stationed at Sareh Ngai at the time of Chief Manneh’s death.

Peter Colley of Military Intelligence; Modou Bah of NIA, Mustapha (Tapha) Gibba; Yankuba Barjo and Isatou Njie commonly known as ‘’Nassi’’ from the Police, Masireh Gibba from Immigration Department and then URR Governor Omar Khan, were allegedly present when Chief Manneh was put in the cabin of a pickup vehicle laying on the laps of the officer who instigated efforts for his treatment.

The sources added that, unfortunately and sadly, the young Journalist died silently in the late evening of mid-2008 before reaching Diabugu hospital. He died on the laps of the young officer who has been crying for him all along from Sareh Ngai. The sources alleged that shortly before putting him in the vehicle at Sareh Ngai, Governor Omar Khan allegedly hit the sick and feeble Journalist on the back of his head and said, ‘’Look at you small Journalist, spoiling the name of the country’’.

According to the sources, Manneh died before entering Diabugu. He was then taken to the Police Station where his unceremonious burial was conducted. He was buried behind the Police Station near a local toilet without any Islamic funeral prayers him.

Journalist Ebrima Manneh disappeared after he was arrested by an officer of National Intelligence Agency (NIA), now State Intelligence Services (SIS), on 7 July 2006, at his office at Daily Observer Newspaper in Bakau. He was a season reporter who rose to the rank of editor and ‘’crime watch columnist’’.

In 2008, the Media Foundation for West Africa (MFWA), based in Accra, Ghana, filed a law suit on his behalf at the ECOWAS Court of Justice in Abuja, Nigeria, against the government of Yaya Jammeh. The government never bothered to send a counsel in defence. They kept mute on the case. After several adjournments without the appearance of Gambia government, the Court ruled in favor of Manneh. It ordered the Gambia government to compensate him an amount of US$100, 000. It was never paid to his family until last year when the new government decided to pay half of the amount ordered by the Court.