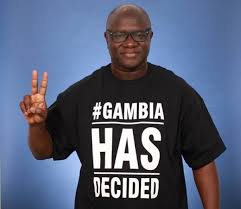 The presence of ECOMIG in The Gambia is a matter of international agreement under the purview of Section 79(1)(c) of the Constitution which requires the National Assembly’s prior approval. In 2017, when ECOWAS

But what was required when normalcy was restored and the constitutional authority was in place, (in this case Pres. Adama Barrow and his Government), everything should be put in line with the Constitution. This means, henceforth if ECOMIG is to stay ever more in this country, Pres. Barrow should seek the expressed approval of the National Assembly to legalize and legitimize the presence of ECOMIG. This was never done.

Not only has Pres. Barrow failed to do what is constitutional, but the National Assembly has also decided to ride along with him. Therefore in 2020 Barrow went to ECOWAS to seek an extension of ECOMIG presence on Gambian soil until December 2021 without any approval from the parliament, who did not also object until today! It should be clear to all that the continued presence of ECOMIG on this land is utterly unconstitutional. Do not listen to the disgusting narratives of the Government Spokesman Ebrima Sankareh and NPP surrogates who try to rationalise this unconstitutionality just to mislead and aid and abet wrongdoing by the President. The fact is, the Gambia does not need foreign troops under the current circumstances. If there is, let the President tell citizens why that is the case.

The claim that there are loyalists of the Tinpot Dictator in the army is true, but they do not pose any threat to the peace and stability of this country. If so, we would have seen armed response from those loyalists when 8 soldiers were arrested, detained, tried and convicted for nine years for planning to overthrow the Government in 2019. But none of that happened. This shows that even if there are Jammeh loyalists, they do not have capacity to change anything, with or without the presence of ECOMIG.

After all, if indeed Jammeh loyalists pose a threat it is because Pres. Barrow has given them the oxygen to become a threat. By his poor leadership and undermining transitional justice process and jumping into bed with Jammeh Enablers everywhere, Barrow has served Yaya Jammeh and APRC more than he has served the Gambia since he took office. By his actions, Barrow has actively empowered, encouraged, strengthened and resuscitated APRC and Jammeh loyalists from dying, naturally!

All Gambians must rise up to demand that ECOMIG forces leave our shores. We appreciate their mission to remove Jammeh which was beautifully accomplished in January 2017. Since then, they are no more here to serve the Gambia but Adama Barrow and by extension, that same Yaya Jammeh. Therefore, it is also in ECOWAS’ and ECOMIG’s best interest that they leave now because the presence of their troops is now becoming an unbearable liability to Gambian citizens. The frequent incidents of violence, abuse and general misconduct committed by their soldiers in various communities are reaching boiling point!

Above all, the presence of ECOMIG is the single most leading cause for the delay and the derailment of the necessary security sector reforms, hence the democratic transformation of this country. Because of this challenge, security agencies remain in abnormal circumstances while Barrow refuses to follow good governance principles, which pose a clear and direct threat to national security. Thus, the effect of ECOMIG presence is adversely huge, thereby highlighting the irresponsible nature of this President in failing to stand up to defend the best interest of the country.

The truth is, Pres. Barrow has no authority to bring and keep foreign forces in the Gambia all by himself, hence ECOMIG has no mandate to be in the Gambia.