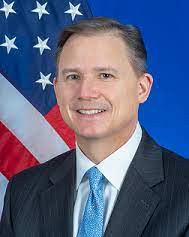 By R. Carl Paschall, Ambassador of the United States to the Republic of The Gambia

As I prepare to depart The Gambia after nearly three years, it is difficult to say goodbye and leave the Smiling Coast of Africa. But I leave this beautiful country with a sense of optimism, inspired by the passion of the Gambian people who press for completion of promised democratic and economic reforms, including justice and accountability.

My optimism is grounded in the strong will of the Gambian people. When we arrived in March 2019, it was thrilling to sense the excitement of a citizenry who, just over two years earlier, demonstrated to the world their commitment to democratic values by peacefully voting for change despite intimidation and repression. That Gambian passion for democratic change, for justice, and accountability has not waned. Indeed, nearly 90% of registered Gambian voters cast their marbles in December – with extremely high percentages of women and youth actively, energetically participating in the democratic process.

The Gambia’s young people continue to provide uplifting inspiration to me. Many committed young adults took an active part in working with the IEC to ensure their fellow Gambians young and old registered and then voted while many others took part in civil society-led voter education and election observation missions.  And these young people – in the words of an esteemed Gambian – are not just the leaders of tomorrow – they are the leaders of today and tomorrow. While in my experience they are unfailingly respectful of their elders, I urge those who like me are older to make room for active youth civic involvement – they are eager, they are energetic, and they are committed to building a brighter future.

It was an honor to represent President Biden at the inauguration of His Excellency Adama Barrow to a second term. I suspect that President Barrow, like my government, is attentive to the passion of the Gambian people for continued progress in democratic reform, transparent and accountable governance, and justice, as documented in the AfroBarometer surveys in 2017 and 2021. Indeed, I am encouraged that in his post-election news conference, the President underscored his commitment to continuing the democratic reforms promised in 2016, many of which remain undone, naming constitutional reform as his intended legacy for a second term. I also note the President’s statement that he is the “biggest fan of term limits” – something Gambians repeatedly and emphatically state they want applied universally.

As partners with the Gambian government and civil society to support efforts to achieve Gambian aspirations, we will continue to invest and work to realize these goals – but they require Gambian ownership, Gambian leadership, Gambian accountability. During my tenure here, I am proud that the range of U.S. government and non-governmental partners has expanded our bilateral and multilateral support to The Gambia’s reform efforts, as well as donated lifesaving COVID vaccines. Among many different programs, this expanded engagement is perhaps most profoundly displayed by the signing of a new bilateral USAID Development Agreement with initial multi-million-dollar programs to support the Gambian-led justice sector and rule of law reform efforts, as well as the Millennium Challenge Corporation Threshold Program agreement to develop and implement strategic reform of the electricity generation and supply sector.

And of course, my wife Jane Ellen and I are infinitely grateful for the many opportunities we have had to meet wonderfully warm, welcoming, hospitable Gambians from all walks of life – from Kartong to Soma to Basse to Fatoto, and Barra to Farafeni to Wassu and the many villages and towns in between. Among our long list of things, we will cherish are the beauty of the land, the warmth of the people, and of course Gambian cuisine.(My favorite is Domoda Chicken, while Jane Ellen prefers Chicken Yassa, we both love Supa Kanja, and Akara, and we believe Gambian Benachin is far better than Thieboudienne). Jane Ellen and I want to simply say “thank you” – thank you for welcoming us and thank you for sharing with us Gambian culture and traditions. We will treasure and hold in our hearts forever this remarkable place.