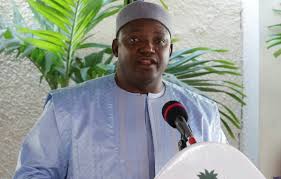 Information reaching Trumpet Newspaper has it that President Adama Barrow has allegedly started to dish out money to Tribal, Regional and Constituency groups, thus emulating his predecessor Yahya Jammeh. Of recent, groups from all over the country are seen paying courtesy calls on the President and announcing political allegiance to him. Just like the former President, the State House has now been turned into a political Bantaba.

According to the information gathered from Foni, a 20-member youth delegation from an association called “Ajamaat, (The Jola), paid a courtesy call on President Barrow at the seat of power in Banjul. The said delegation was led by former Director General of National Intelligence Agency (NIA) Abdoulie Kujabie, to show solidarity to the president and his government.

Our sources within the group indicated that after the meeting, President Barrow gave them D20, 000. The sources added that the said amount was handed to the group leader Kujabie, but he instead asked another member to collect the money from Barrow.

President Barrow was quoted as saying the money was meant for their ‘fares’. The source added that Kujabie refused to touch the money and later told them he doesn’t need it and do not want to know how they spend it.

In similar but different engagements with others like Kombo North, Kombo South, Upper River Region and Niumi Groups, the president was alleged to have given out substantial amount of money to all the aforementioned groups after their visits to the presidency.

However, the trumpet is yet to capture the amounts Barrow dished out to these groups, respectively.

The country’s president is now bragging about his wealth and riches, avowing that at the end of his term he would never owe Gambia a ‘’single butut’’ unless The Gambia owes him.

Contacted for comments, the Government Spokesperson, Mr. Ebrima G. Sankareh said he’s never aware or witnessed where the president gave out money to regional or tribal groups. He said the mandate of his office does not include such and he cannot be in any position to know the private dealings of the president.

The Barrow-government’s mouthpiece said the only meeting he’s witnessed and attended was during the visit by the Kombo North group, and that he did not witness where the president gave money to them.