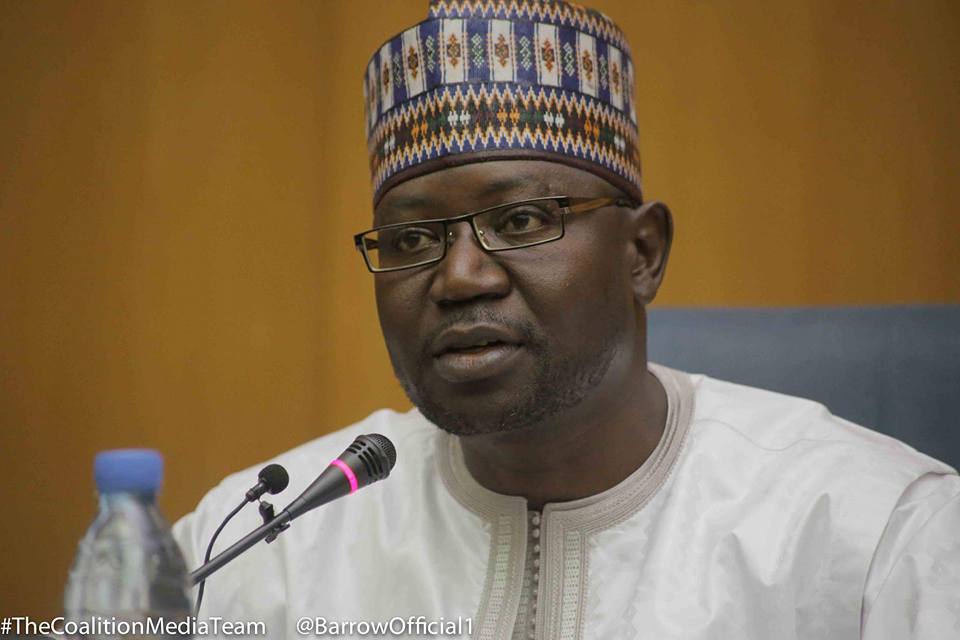 The former Minister of Interior has said the views of the Christian Council should be taken seriously with regard to the draft constitution. The leader of the Gambia Moral Congress however argued further: “The draft was not an innovation to provide for Shari’ah courts. What the draft sought to achieve was to expand the jurisdiction of existing Shari’ah courts to resolve challenges that emerged in the limited jurisdiction and application of Shari’ah in Cadi courts. —–”

Mr. Mai Fatty stated further that “There is no provision in the draft Constitution that legally compels, mandates or subjects non-Muslims to shari’ah courts’ jurisdiction. Any imputation to the contrary is fanciful, and not grounded on any provision in the Draft.”

Before addressing my points, and without unnecessarily repeating points already addressed by an earlier rejoinder by Pa Louis Sambou, I will quote the writer’s response to Honorable Fatty as follows:

“It is perhaps helpful to apprise Mr. Fatty of the current state of the relevant law being section 137(4) of the Constitution which states that: “The Cadi Court shall only have jurisdiction to apply the Shari’ah in matters of marriage, divorce and inheritance where the parties or other persons interested are Muslims.” Clearly, as we speak, under the existing 1997 Constitution, the Shari’ah only has jurisdiction if all “parties are Muslims”.

Now let’s contrast this with the proposed changes in the draft Constitution, shall we?

I would like to humbly draw Mr. Fatty’s attention to the provision in the now defunct Draft Constitution which addressed the issue of Shari’ah jurisdiction being section 188(1) which states that: “The Shari’ah High Court has original jurisdiction to hear and determine Shari’ah causes or matters relating to marriage, divorce, inheritance, and endowment (waqf) amongst people who are subject to Shari’ah in that regard.” The legal intent of this provision was to: change the legal text from the current position of the law from “whether the parties are Muslims” to “whether the cause or matter belongs to a Muslim?” so that a non-Muslim spouse, child or dependent of a Muslim will for the purposes of inheritance etc., be subject to the jurisdiction of the Shari’ ah.

Paragraph 477 of the CRC’s final report did not escape the watchful eye of the legal mind.

The CRC final report on page 120, Section 477 says, “The CRC deliberated on this and determined that the jurisdiction of the Shari’ah High Court including the Shari’ah Court applies only to members of the Muslim faith in respect of marriage, divorce, inheritance and endowment (waqf).” Had the CRC included this clear statement in the Draft Constitution, rather than limiting it to their report which is not legally binding and has a limited shelf life, we could have avoided all this misunderstanding.

Therefore with all due respect Mr. Fatty, if there is any imputation not grounded on any provision in the Draft, “it is certainly that of your ‘fanciful’ misconception”.

Mr. Fatty in his statement alluded to the following; “The Shari’ah provisions did not create a new judicial system but rather reinforced the existing Shari’ah judicial system contained in the 1997 Constitution in two ways: a] by expanding its jurisdiction and b] by streamlining its appellate processes.”

To keep the record straight and in the interest of keeping the general public adequately informed, it is unequivocal that: 1] under the existing 1997 Constitution, there exists the Common Law legal system comprising of the Magistrates Courts and the relevant tribunals — the High Court, Court of Appeal and the Supreme Court — with only the Shari’ah being administered by the Cadi court and its Appeal panel. None of these structures under the existing Constitution is a superior court. But in contrast, 2] the now defunct Draft Constitution in Chapter X, Part III proposed the introduction of Superior courts among which the Shari’ah court featured, thus ascribing the Court of Appeal and the Supreme Court having Shari’ah jurisdiction. Therefore contrary to Mr. Fatty’s claims, the proposal under the now defunct Draft Constitution put in place the introduction of a new religious judicial system; the Shari’ah which is to operate at par with the Common Law and in specific cases has been original jurisdiction. This point is being merely made to clear the air over any overhanging doubt by Mr. Fatty and point to a fundamental inaccuracy on his part of the facts.

Mr. Fatty was further reported to have commented on how the practice of Islam is prejudiced in “Common Law Europe”. To correct the author, there is no such thing as “Common Law Europe” — “Common Law” is only practiced in United Kingdom, the jurisprudence in most of the rest of Europe is Roman law and not “Common Law” as Mr. Fatty incorrectly asserts. Additionally, to suggest that the “Common Law” in the United Kingdom is prejudicial to Islam is with all due respect to Mr. Fatty a very dangerous fantasy which must definitely not be allowed to go unchallenged: The UK Equality Act 2010 among other things protects everyone’s right to free practice and manifestation of religion both in public and in the workplace, something which equally protects Muslims as evidence in the case of Abdirisak Aden and Mahamed Hasan v Tesco

Mr. Mai Fatty continued: “In many countries of common law Europe where freedom of religion is said to be upheld, Muslims are not permitted to use the public address system during their call to prayer, while church bells with the highest decibel occupy the public space at Christian prayer times. In some countries, they even legislate against the hijab and Islamic schools are strenuously regulated. Yet millions of Muslims in those advanced democracies continue to exercise their Faith under some of the most draconian imperatives.”

Mai mentioned how non-Muslims live under some of the most draconian conditions in Europe; he dwelt on how minority Muslims are unfairly treated but never catalogue the treatment of non-Muslims in the Middle East (perhaps with the exception of Dubai-United Arab Emirates in recent times). As a person who has lived in the Kingdom of Saudi Arabia for over 20 years may I inform you that at every Immigration Post in Saudi Arabia entry will not be granted to any person whose passport discloses that he/she is a Priest, Pastor or Clergyman, the carrying of any religious article or literature of faith other than Islam is illegal. In neighboring Kuwait a church may be constructed only if it satisfies all three prerequisites namely: that the Church must be constructed away from residential areas, its doors must always be kept shut and that neither a cross nor a church bell must be installed.

To come closer at home (The Gambia): There is currently a prolonged embargo (more than 15 years) on the registration of Churches and there are no churches/prayer rooms at the State House and in government premises. Christian women married to Muslim men are discriminated and denied inheritance because of their faith. In some cases they have been sent out of the homes they contributed to build. Some Muslim converts to Christianity have been dragged into Cadi courts and stripped of their wives and children and properties.

So, Mr. Mai Fatty, as you have said “I want to assure our Christian brethren that the inter-faith harmony that exists for over a century between Christians and Muslims is stronger than any written instrument, It is inherent in our nature as Gambian and has over time  constituted part of our tradition and culture. It is now a settled way of life. Most of us will join them to fight any practical effort to marginalize them on the part of any individual or authority”

We expect that you, other government leaders, activists and Muslim leaders will rise up to condemn all expressions of unfair treatment and ensure all Gambians are treated equally irrespective of their religious persuasion. Let us all note that seeking fame through politicizing religion is not advisable. One should rather embark on nationalizing one’s political agenda.

As stated in the earlier rejoinder by Pa, Mr. Fatty should note that:

“Muslims in the UK are not obligated to submit to the jurisdiction of the UK Common Law family courts hence the existence of Shari’ah Councils which are privately administered independent of the UK Justice system by Muslims, in accordance with Islam and for Muslims who choose to voluntarily submit to its jurisdiction. This right subsists thanks to the rightful safeguards accorded by the “Common Law” which Mr. Fatty speaks of in pejorative terms”

The way of life in The Gambia and religious harmony has been exemplary up until December 15th 2015. It is important to note that the recent implantation of extreme practices and views unknown to our shores also influenced the Constitution Review Commission’s (CRC) 2020 Draft Constitution. These tendencies must be eradicated before they become toxic. We must also guard against the spirit of dictatorship by the majority, however subtle, that runs through the Draft Constitution. I would conclude by registering my agreement with the words of the earlier rejoinder by Pa Louis that reads: “Mr. Fatty’s commentary that “the views of the Christian Council should be taken seriously with regard to the draft constitution” are acknowledged but, I guess I can confidently say that I am speaking for the vast majority of Christians in saying: thank you so very much and — well spoken ‘Captain hindsight’ and, to borrow our ‘Bus Driver’s phrase: “where were you?” ”.