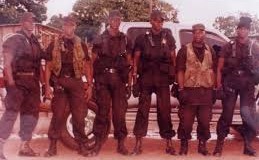 Trumpet Newspaper has reliably learnt from credible sources that exile former president Yahya Jammeh has given two bulls for officers and soldiers stationed at Fajara Barracks to feast after the gruesome murder of 55 West African nationals by his rogue security operatives sometime in late July 2005. The soldiers were ordered to throw a party in celebration of what Jammeh and his notorious officers term as foiling a foreign invasion. The West African nationals were accused by Jammeh and his officers as mercenaries attempting to overthrow his government.

According to our sources, on 21 July 2005, the West African would be migrants’ bounded for Spain were arrested by then Station Officer (S/O) Jawara Demba and Commanding Officer (C/O) then Assistant Superintendent of Police (ASP) Mustapha Njie of Barra Police Station and taken into custody.

Sources said they were packed in two groups and handed over to then Lieutenant Dembo Jarjue and Lieutenant Kujabie of the Gambia Navy. Sources said Lieutenants Jarjue and Kujabie escorted the young men in two navy boats from Barra to the naval base in Banjul. At the Navy they were received by senior officers from the Military, Police and the defunct National Intelligence Agency (NIA).

Our sources indicated that almost all senior Military, Police and NIA officers converged at the navy base to witness the arrival and processing of the West African nationals.

Whiles the captives were been process at the Navy in the presence of Senior security chiefs and heads, Jammeh’s assassin team (Jungullers) led by Captain Tumbul Tamba known as ‘hell Manager’, Captain Musa Jammeh known as ‘Maliya Mungu’, Lieutenant Kawsu Camara alias ‘Bombarde’, Lieutenant Sanna Manjang, Nfansu Nyabally and others arrived at the scene. Then the detainess were bounded together, tied back to back and taken away.

However, our sources could not verify where exactly the migrants were taken to but reports had it that some were taken to Fajara Barracks, Kairaba Police Station and Kotu at the compound of late Baba Jobe where Jammeh’s killer squadron used as a safe house and torture centre.

The following day Yahya Jammeh gave 2 bulls for the officers and soldiers at Fajara Barracks to feast for a job well done.