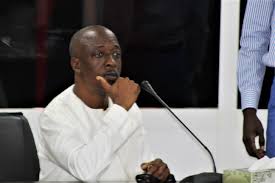 The former Local Government Minister under the Armed Forces Provisional Ruling Council (AFPRC) Military Junta, rtd. Captain Yankuba Touray, who is currently incarcerated at the State Central Prison at Mile II on the charge of murder, is still in a defiant mood and staying strong in prison. This medium can report from very reliable sources close to the former junta number five that, he is neither relenting nor subduing to the harsh conditions of the prison.

Sources intimated to the Trumpet that Yankuba Touray, popularly called Yanks, is boasting about being a “gallant soldier” who would never betray the cause of the July 22 Revolution.

“So far, Yanks has been doing very well in Prison and bragging about the role he played in the advent of the July 22 Revolution. He kept calling out Sanna Sabally and referring to him as a betrayer and liar,” a source intimated.

For the former Junta member, prison will enable and empower him to have more time to read and develop himself to be versed in the Holy Qur’an.

The Trumpet Newspaper gathered that he has “no regrets” as to what is happening to him, but instead he’s been emboldened to standby the cause of their revolution.

It could be recalled that Touray was subpoenaed to appear and testify before the Truth, Reconciliation and Reparations Commission (TRRC) at Kololi on 26 June, 2019. He was arrested after he defied the Commission by refusing to testify before it. He stormed out of the proceedings which eventually led to his arrest following an order by the Commission’s Chairman Dr. Lamin J. Sise.

He had been charged with contempt of Court and murder of then Finance Minister Ousman Koro Ceesay. The contempt charge was struck out by the Court, but he was remanded on the charge of murder.

Prior to that, he was initially arrested on 2 March 2019 and charged with interference with TRRC witness Alagie Kanyi. He was tried alongside Fatoumatta Jahumpa Ceesay before Kanifing Magistrates’ Court. The case was later moved to the Banjul High Court where the charge against them was subsequently dropped by the Attorney General Chambers.