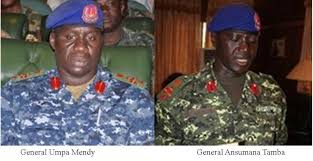 The General Court-Martial sitting at the Yundum Barracks the home of the First Infantry Battalion has on Monday 27 May acquitted and discharged two senior officers of The Armed Forces, Brigadier Generals Umpa Mendy the former Principal Protection Officer to ex-President Yahya Jammeh and Ansumana Tamba, then State Guard Commander from a charge of desertion from the army. But the Court also ruled that the verdict is subjected to confirmation but did not elaborate by whom or who. The two Generals left Gambia in late January 2017 with former president Yahya Jammeh for Equatorial Guinea where they lived until their voluntary return  last year.

In summing up the evidence Judge Advocate Amina Saho Ceesay said desertion requires that the person have the intent of abandoning his or her post or unit without returning for six months.

The defence Counsel was Barrister Uzoma Achigbue, Charles Thomas and Ceesay. The State was represented by Acting Director of Public Prosecution M .B. Abubacar