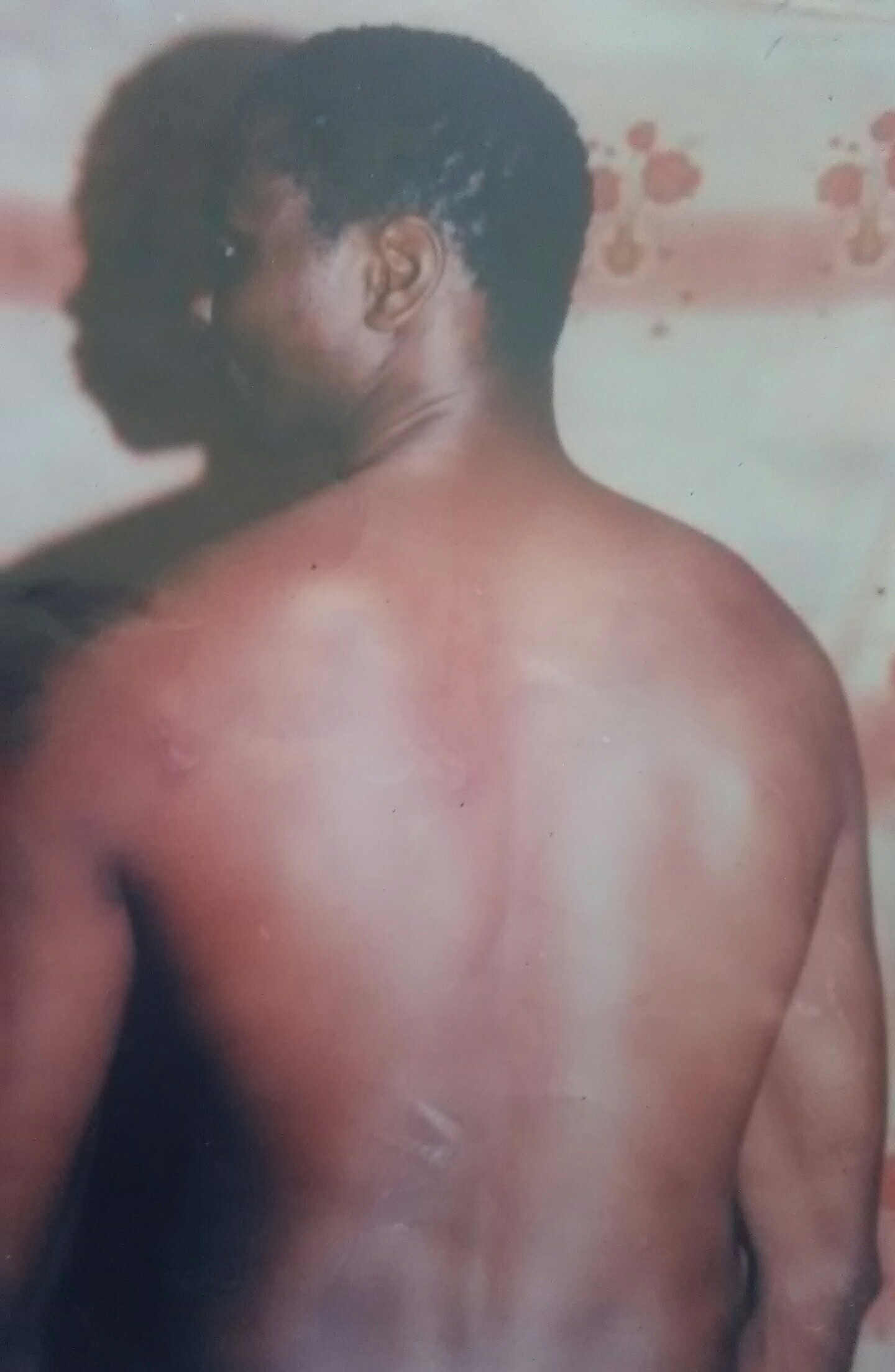 Mr. Lamin Karbou a former operative of the National Drug Law Enforcement Agency recalls back in late May 2009 when he was mercilessly beaten almost to death by officers of the notorious National Intelligence Agency now call State Intelligence Service. Mr. Karbou who was also a famous football coach in Brikama alleged that he was beaten with cables, wires and hose pipes leaving injuries all over his back and arm.

Karbou pointed out that in the following morning 30 May he was directed to report the incident to then NDEA Director General Ibrahim Bun Sanneh, Deputy DG Karamo Bojang and Director of Operations Ousman Sembeh Sanneh. He said after the narration of his story, Bun Sanneh angrily went with him to report the matter to then NIA Director General Lamin Bo Badjie. He indicated that after narrating his case to Bo Badjie, he was directed by Badjie to meet with his Director of Operation Ebrima Jim Drammeh.

He stated that after narrating the same story to Jim Drammeh he Jim called the Director of Intelligence Edrissa Jobe known as ‘Alagie Morr’ who later joined them in the office of Jim. Karbou indicated that Alagie Morr asked him to make a statement to that affect but that his statement should not levelled any allegation against the NIA officers. He said he vehemently refused and stick to his original narration of the incident.

Mr. Karbou alleged that he was then taken to another room which upon entering five men grabbed him from behind and Alagie Morr immediately hand cuffed him and he was wrestled to the ground.  He stated that the room was filthy with blood stains all over the wall and the floor. He added that there were electrical instruments for electrocution, cables, wires, hose pipes, scissors, cutters, pliers and other torturing tools. He alleged that Alagie Morr told him the blood was that of his previous victims.

Continuing his recollection, Mr. Karbou alleged that Jim Drammeh took his two cell phones a Motorola and Sony Ericsson from him and Alagie Morr asked him to either comply with their demands of writing a favourable statement or risky torture. He said he refuses to succumb to their demands then they started to beat him with blows and kicks. He added that after showing no sign of given in, his torturers started to beat him with electric cables, wires and hose pipes. He indicated that he was beaten until his back and arms were swollen and bleeds profusely. He added that he was beaten till he collapsed on the floor and blood was oozing from his back to the waist dripping down to his legs.

He pointed out that Jim Drammeh ordered them to give him few minutes to rest and recalculate his statement. He indicated that after Jim and Alagie Morr left the room leaving him with other NIA operatives. He said he immediately got up from the floor and head boot the man standing between him and the door. He added that the man fell on the floor then he quickly rushed out and headed for exit via the NIA back door opposite the beach side.

Mr. Karbou said he ran naked with his hands cuffed behind from NIA Headquarters at Marina Parade to NDEA office in Buckle Street straight into the offices of the NDEA boss Bun Sanneh in the presence of his deputy Karamo Bojang, Commissioner Essa Sarr, Director of Operations Ousman Sembeh Sanneh and O/C Lamin Ceesay.

He added that his torturers Jim Drammeh, Alagie Morr, Lamin Darboe and a lady call Wonto Yarboe pursuit him into the premises of NDEA and into the office of their boss Bun Sanneh. He indicated that his torturers forcefully wanted to arrest and dragged him out of the office of Bun Sanneh until O/C Lamin Ceesay almost fought with Alagie Morr in the presence of NDEA senior officers. He said Bun Sanneh later called then Inspector General of Police Ensa Badjie who came to the scene in a hurry. He said IGP Badjie was mad and warned Alagie Morr and his NIA operatives if they did that to a Police officer he Ensa Badjie will kill someone. He added that there was lot of commotion and his colleagues wanted to attacked Alagie Morr and team but were restrained by Karamo Bojang.

He said to his surprise Bun Sanneh escorted him back to the NIA to report the matter to NIA Director Lamin Bo Badjie who appeared very shocked about the incident and he Bo Badjie instructed Alagie Morr to remove the cuff from his hand but Alagie Morr insisted that the key was lost. He added that it was NIA operative Malick Ceesay who used a sharp blade to cut the cuffs from his hands. He said he was later taken into a room where he found his colleague Lamin Simma in detention together with the suspected drug dealers.

Karbou indicated that in the evening IGP Ensa Badjie came to the NIA and ordered him to be taken for his treatment and released but that never materialised. He alleged that after Ensa Badjie left Alagie Morr ordered Sukuta Jammeh not to take him to hospital under that condition. Karbou said after three weeks in detention he was taken to Military Clinic for treatment. Again after eight weeks in detention without any charges his boss Bun Sanneh neither visited nor any NDEA senior officers do anything about his illegal detention and torture.

Mr. Karbou stated that after eight weeks he was moved to the Police Headquarters where he was pressed with a conspiracy charge alongside the suspected drug dealers. He indicated that the prosecution could not proceed with the case until on 12 January 2011 when the matter was withdrawn by Director of Public Prosecution.

Mr. karbou said it was until when late Benedict Jammeh was appointed Director General of NDEA that he instituted a panel of investigators consisting of Foday Barry, Ebrima Kunchi Jammeh, Lamin Gassama and Yusupha Jatta to reinvestigated his torture claims. He asserted that Alagie Morr, Jim Drammeh, Lamin Darboe, Omar Jammeh knows as ‘Boy Boot’ and Lamin Manneh were arrested and brought to NDEA at Holigam where they were slammed with charges of torture. However, Karbou stated that due to the manipulation of the judiciary there was an interference of the executive into the case. He alleged that the trial Magistrate Taiwo Alagbe was given executives orders not to convict the accused person. He said the reason given to the Magistrate was that convicting the accused person will sent a bad signal about the NIA and the entire government machinery.

He concluded that after ten years he still awaits justice and for the recovery of his two cell phones from Ebrima Jim Drammeh.

When contacted for comments Ebrima Jim Drammeh who is now the Director of Operation of NDEA, said he has nothing to comment on the matter as the case was before the court which exonerates him and his colleagues. He indicated that he and his colleagues fought tooth and nail to clear themselves of the charges so he has no cause to fear. He told this reporter that he is an experienced civil servant with outstanding records and will not allow anyone to tarnish his image. He argued that he knows his rights and know where to address matters of character assassination.

However Lamin Darboe, Alagie Morr, Lamin Manneh and Omar Jammeh could not be reached for comments on the allegation.