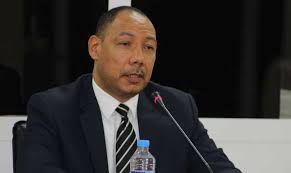 A former seasoned officer of the defunct National Intelligence Agency (NIA) name withheld, who rose through the ranks from a liaison officer attached to State House to onetime Director General of the spy agency, has informed Trumpet Newspaper about dozens of phone calls he witnessed between then number two Military ruler retired Captain Edward Singhateh and Landing 13 Badjie, who was designating himself as deputy Director General of NIA on the day the burnt body of Finance Minister Ousman Koro Ceesay was discovered at the outskirts of Jambur in Kombo North.

The former spy chief and confidant of former President Yahya Jammeh, who later fell apart with the ex-President and his regime, alleged that he suspects 13 Badjie knew something about the incident. He could vividly recall a nervous 13 Badjie constantly receiving phone calls from Captain Singhateh.

The body of late Finance Minister was found burnt with his official Mercedes Benz car with the remains in the driver seat at the outskirts of Jambur on 24th June 1995. The body was burnt beyond recognition.

At the time 13 Badjie was very close to the Junta Number 2 and Edward was frequently seen visiting Badjie at the NIA Offices.

On the day before the incident, he remembered shaking hands with the late Minister at the Airport after seeing the then junta leader Captain Yahya Jammeh off.

The following day, as he was at NIA Headquarters, he was informed by then Director General, late Samba Bah, about a rumour of a missing Minister and a burnt car found near Jambur believed to be a Ministerial car. The informant further said he was assigned together with Landing 13 Badjie to go to the scene. Before setting off, he could recall Badjie stepping aside talking on the Analogue cell phone.

The witness confirmed that he could not hear the voice from the other end of the phone, but 13 Badjie kept on saying ‘Yes sir, yes sir; I will do so. Yes sir, am on my way there, I will get back to you’.

Upon arrival at the scene, they took notice of the burnt car and few broken skeletons found in the driver’s seat.

On the way back to NIA office, he could recall 13 Badjie receiving numerous calls from the same person. During one of the calls, he heard Badjie saying, ‘Yes sir, I will do that as soon as I can’. Badjie turned to him and said, ‘Jammeh is not here; he is in charge and want to know about the case’. The witness said he only shook his head and never uttered a word. That was the beginning of his suspicion of a foul play by the government.

He and Badjie briefed Director Bah who promised to forward the matter to the higher authorities for further investigation. But to his surprise, no further investigation order was given to them as far he is concerned and up to the years he rose through the ranks to Director General. The death of Ousman Koro Ceesay becomes a ‘cold long close case’.

He said to his surprise, late Samba Bah confided in him that the government was responsible for the death of Koro Ceesay and that he suspected Landing 13 Badjie to be aware of the plot.

According to him, government was never interested in finding out or bringing the killers of Koro Ceesay to justice. He believes all the Junta members at the time are guilty of the murder.

Frantic efforts were made to reach out to Landing 13 Badjie for his comments but our effort bears no fruits. A close colleague serving with him at an International mission in Darfur confirmed that Badjie will never talk to any medium about his alleged involvement in any atrocities in the Gambia. He said since Badjie left the shores of the Gambia in late March 2006, he never returned to the country.

In late October 2019, the former Junta Number 2 Captain Edward Singhateh whose name had been at the centre of the controversies surrounding  Koro’s gruesome death, appeared before the ongoing Truth, Reconciliation and Reparations Commission (TRRC) and rubbished  his alleged involvement in the incident. Singhateh linked Koro’s death to a clandestine monetary transaction he was involved with Junta leader Yahya Jammeh, MFDC Rebels operating in the Senegalese Southern region of Casamance and onetime notorious killer late Captain Tumbul Tamba.