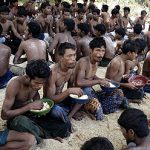 (The Hague, December 10, 2019) – The International Court of Justice (ICJ) genocide hearings will include the first response by Myanmar to allegations of atrocities against the Rohingya before an independent and impartial court, Human Rights Watch said today. A Human Rights Watch “Questions and Answers” document explains the significance of the December 10-12, 2019 hearings, the process for enforcement of court orders, and other aspects of the proceedings in The Hague.

On November 11, Gambia, with the backing of the 57 members of the Organisation for Islamic Cooperation, filed a case with the court alleging that the Myanmar military’s atrocities in Rakhine State against Rohingya Muslims violate the Convention on the Prevention and Punishment of the Crime of Genocide. On November 20, Myanmar recognized being bound by the ICJ Statute and announced that its de facto leader, Aung San Suu Kyi, would lead the delegation to “defend the national interest of Myanmar.”

On December 9, the governments of Canada and the Netherlands announced they considered it “their obligation to support the Gambia before the ICJ, as it should concern all of humanity.” Both Canada (1952) and the Netherlands (1966) are parties to the Genocide Convention. Other members of the Genocide Convention should also support Gambia’s case, Human Rights Watch said.

In 2018, the United Nations Independent International Fact-Finding Mission on Myanmar concluded that “the actions of those who orchestrated the attacks on the Rohingya read as a veritable check-list” on how to destroy a national, ethnic, racial, or religious group. The mission concluded in 2019 that “the State of Myanmar breached its obligation not to commit genocide under the Genocide Convention.”

The case before the ICJ is not a criminal case against individual alleged perpetrators, but a legal determination of state responsibility for genocide. Gambia has asked the court for provisional measures to require Myanmar to immediately take all steps to prevent genocidal acts, including to stop and prevent further genocidal acts; to ensure that security forces do not commit or incite genocidal acts; and to preserve all evidence related to the military’s crimes.

Gambia’s filing was the first from a country without any direct connection to the alleged crimes that used the country’s membership in the Genocide Convention to bring a case before the ICJ. Gambia, a small West African country, has only recently emerged from the repressive 22-year rule of Yahyah Jammeh and its own history of human rights violations. After filing the case, Gambian Justice Minister Abubacarr Tambadou said that “the aim is to get Myanmar to account for its action against its own people: the Rohingya.”