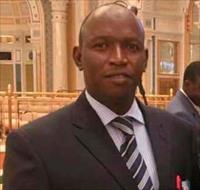 The Director General of State Intelligence Services (SIS), Mr. Ousman Sowe has been implicated in the alleged plan activities of former National Intelligence Agency (NIA), who were assigned by the former regime to neighbouring Senegal to spy on exile or dissident Gambians and to hatch plans to have them kidnapped and smuggled back into the Gambia.

Cases like the kidnapping of former Kiang Parliamentarian Mahawa Cham and Businessman Saul Ndow from Dakar is believed to have been hatched by agents of NIA.

Mr.Ousman Sowe was an officer of then feared National Intelligence Agency (NIA), now call SIS. He rose through the ranks and manned different positions within the agency until the fall of Yahya Jammeh in December 2016.

Mr. Omar Joof, the former president of Gambia Student Union (GAMSU), who testified before the Truth, Reconciliation and Reparations Commission (TRRC) on 24 September 2019, revealed that Mr. Ousman Sowe, who was his schoolmate and friend at the time came to Dakar on several occasions to have him kidnapped and sent to Banjul. Joof was living in exile in Dakar after he flees in the aftermath of the 10 and 11 April 2000 student demonstration in which 14 students were gunned down.

Mr. Joof adduced before the Commission that on several occasions Ousman Sowe used false pretence to lure him to a particular place to have him kidnapped. Joof alleged that he met Sowe in Dakar who told him he came to Senegal to seek spiritual assistance from a Marabout. Joof added that he never believe in that explanation due to the fact that several Senegalese were coming to the Gambia to seek spiritual help.

Joof without knowing that his former schoolmate has turncoat and become a spy agent of the notorious regime, was telephoned by Sowe to meet at the said Marabout’s house. He refused the offer and reported the matter to the Senegalese authorities who advices him to stay away from Sowe. He was later told that Sowe works for the notorious NIA. He was advice from seeing Sowe.

Joof also alleged that Mrs. Kura Mbissan, wife of late legendary Kora player Lalo Kebba Drammeh was also involved in plans to have him kidnapped from Dakar and sent to Banjul.