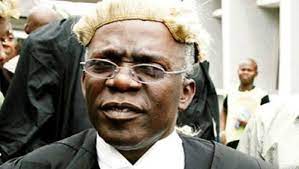 Mr. Ebrima Barrow a Gambian national and victim of arrest, unlawful detention and torture by security officers of the former regime has decided to sue the Gambia government for the gross inhuman treatment and human rights violation he endured in the hands of Gambian security officers which led to his detention without trial for months and a trumped up treason charge against him.

He was detained, beaten and tried but acquitted and discharged by the Court in 2004. Since then Mr. Barrow has been living in exile. He did appear before the Truth Reconciliation and Reparations Commission (TRRC) and narrated his four years of tribulation.

Mr. Felana has so far represented many victims including Gambians against their governments and has won several cases at the said Court. According to the facts suit file number ECW/CCJ/APP/202I the applicant Mr. Ebrima Barrow born in Badibou Salikenni on 2nd January1952 attended Gambia High School and upon graduation travelled to Nigeria, Italy and England.

In early 2000, Mr. Barrow travelled back to the Gambian with some goods and commenced trading business until he was arrested on Thursday, 22nd June, 2000 at about 2:30am to 3am by a group of armed men on board five vehicles at his home and forced into a white pickup and taken to the National Intelligence Agency (NIA) Headquarters in Banjul.

He narrated that he was thrown into a small cell for a month in a filthy and smelly condition with urine and water on the floor.

On the following day of his arrest, he said he was taken before a 12 man panel for questioning. During the questioning, he alleged that Mr. Edrisa Jobe known as Alagie Morr was ordered by a man to get him. He was stripped naked and Mr. Morr ordered some men to roll him over and over.

He alleged that he was kicked, punched, slapped and stamped on with boots beaten until his front tooth was broken and blood was oozing out.

The applicant claimed that he was kept at Mile II Central Prison for six months (extra-judicially) without access to his Lawyers, Doctors, family and friends.

Mr. Ebrima Barrow avers that on 19th December, 2000, he was arraigned with other persons by the Director of Public Prosecution Mr. Emmanuel Akomine Agim before Justice Grant of the High Court in Banjul and charged with treason to overthrow the government of Yahya Jammeh.

He was tried alongside Momodou Dumo Saho, Lieutenant Lalo Jaiteh, Lieutenant Omar Darboe, Momodou Marenah, who were also charged on the same counts.

Barrow later flew into exile after Gambian security agents continued to torment, harass and intimidate him even after he was discharged and acquitted by the Court. He left the country few days after the assassination of his friend Deyda Hydara who was killed few days after visiting Mr. Hydara.

Mr. Barrow is asking the ECOWAS Honourable Court to direct and order the government of the Gambia to pay him the sum of $500, 000. 00 (Five Hundred Thousand Dollars) as aggravated and general damages for the violation of his right to liberty, freedom of movement, private and family life, dignity of person and health and another $1000. 00 (One Thousand Dollars) as cost of legal fees.

He also urged the Court to order for the arrest and prosecution of former president Yahya Jammeh and his accomplices forthwith.

When contacted for confirmation and comments, the Deputy Director of Civil Litigation Mr. Kimberg Tah said the Attorney General of the Gambia is aware and was served with a suit before the ECOWAS Court filed by Lawyer Femi Falana. Mr. Tah, however added that his office has not yet  been officially served with Mr. Barrow’s suit but that they received an alert about the case.

On whether the Gambia government will put up a defence in the trial, Mr. Tah said they are waiting for the outcome of the recommendation of the TRRC. He added that their reaction to the suits against the government depends on the results of the TRRC recommendations and implementations. Barrister Tah added that within four months his office will decide about the two cases.