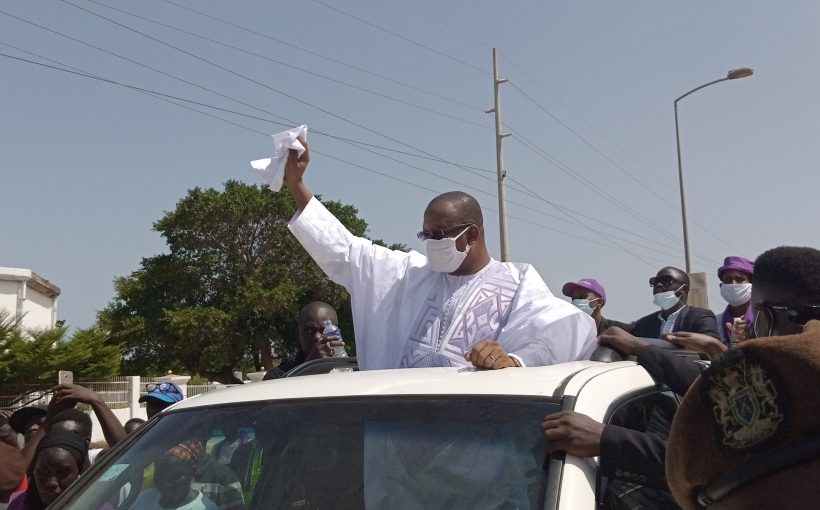 Mamadi K. Camara a trained Canadian teacher and a British trained accountant marched into the election house alone with his application documents which was received by the IEC Chairman Mr. Alieu Momar Njie.

Mr. Camara seems to have brought along all required papers did not only refused to take questions from the media but made unexpected statements and allegations of maltreatment, torture and detention he endured in the late 80s.

Mama Kandeh of GDC is testing the grounds for the second time when in the 2016 polls he scored 17.1 percent of the votes caste is now in mutual alliance with former ruling APRC party breakaway faction.

Talking to the media, Kandeh denied being a Yahya Jammeh loyalist and maintains that he filed his nomination papers as a GDC candidate. He also denied signing any agreement with the APRC faction of granting Jammeh an amnesty when voted into power. Mr. Kandeh vowed to end corruption and make sure corrupt officials are sacked and prosecuted for crimes committed at office.

Dr. Ismaila Ceesay of CA is the third candidate to file in nomination papers and promise that a CA Government will prioritise economic and civil service reform to ensure citizens get quality health and education services. Dr. Ceesay said the Gambia is at an alarming stage and needs great help to fix it.

A political Scientist Doctor accompanied by his spouse and supporters warns that the demographic dividend of the Gambia shows that in the next 25 years the Gambia will see a rapid growth in human population.

Dr. Ceesay also decried the youth unemployment and promised a CA Government will promote vocational training to fix that problem.

Mamadou Bah, an independent candidate after submitting his application, lamented the easy flow of cannabis sativa into the Gambia from Southern Senegal ( Cassamance) and vowed to construct a wall between the two borders to control the cannabis trade. He also raised concerns of high level unemployment of youth which he is ready to combat.