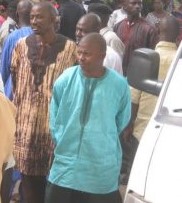 Reliable information gathered from trusted persons closed to Ex- Lieutenant Colonel Kawsu Camara known as Bombarde, has it that the onetime hit man of the assassin squad of former president Yahya Jammeh called the Jungullers has decided to return back home to face the truth about his involvement in the activities of the jungullers. Bombarde is currently in Dakar, Senegal deciding his journey back home.

Bombarde a onetime trustee of Yahya Jammeh but failed apart in October 2009. He was accused of treason alongside former Chief of Defence Staff General Lang Tombong Tamba and convicted to death. Upon appeal, the Supreme Court overturned the death conviction to life imprisonment.

In July of 2015, he was among dozens of prisoners given presidential pardon. He later went into self impose exiled in Senegal. In May 2017 he relocated to Mauritanian after his indictment at the Banjul Magistrates’ Court alongside Major Sanna Manjang for their alleged involvement on the death of Journalist Deyda Hydara.

The information received by Trumpet stated that Colonel Camara who was spotted in Mauritania has now decided to move back to Dakar awaiting his return to Banjul to appear before the country’s ongoing Truth, Reconciliation and Reparations Commission (TRRC), in which his name has constantly resurfaced.

Bombarde, according to our sources, has decided to come out after his former colleagues Malick Jatta, Omar Jallow, Alieu Jeng and others has spilled the beans at the TRRC about the activities of their team in killing and torturing Gambians and non Gambian alike on the orders of former president Yahya Jammeh.

However, it is not clear whether Bombarde was contacted by the TRRC investigators to testify. But it has been confirmed that he is willing and ready to face the commission and narrate his own side of the story.