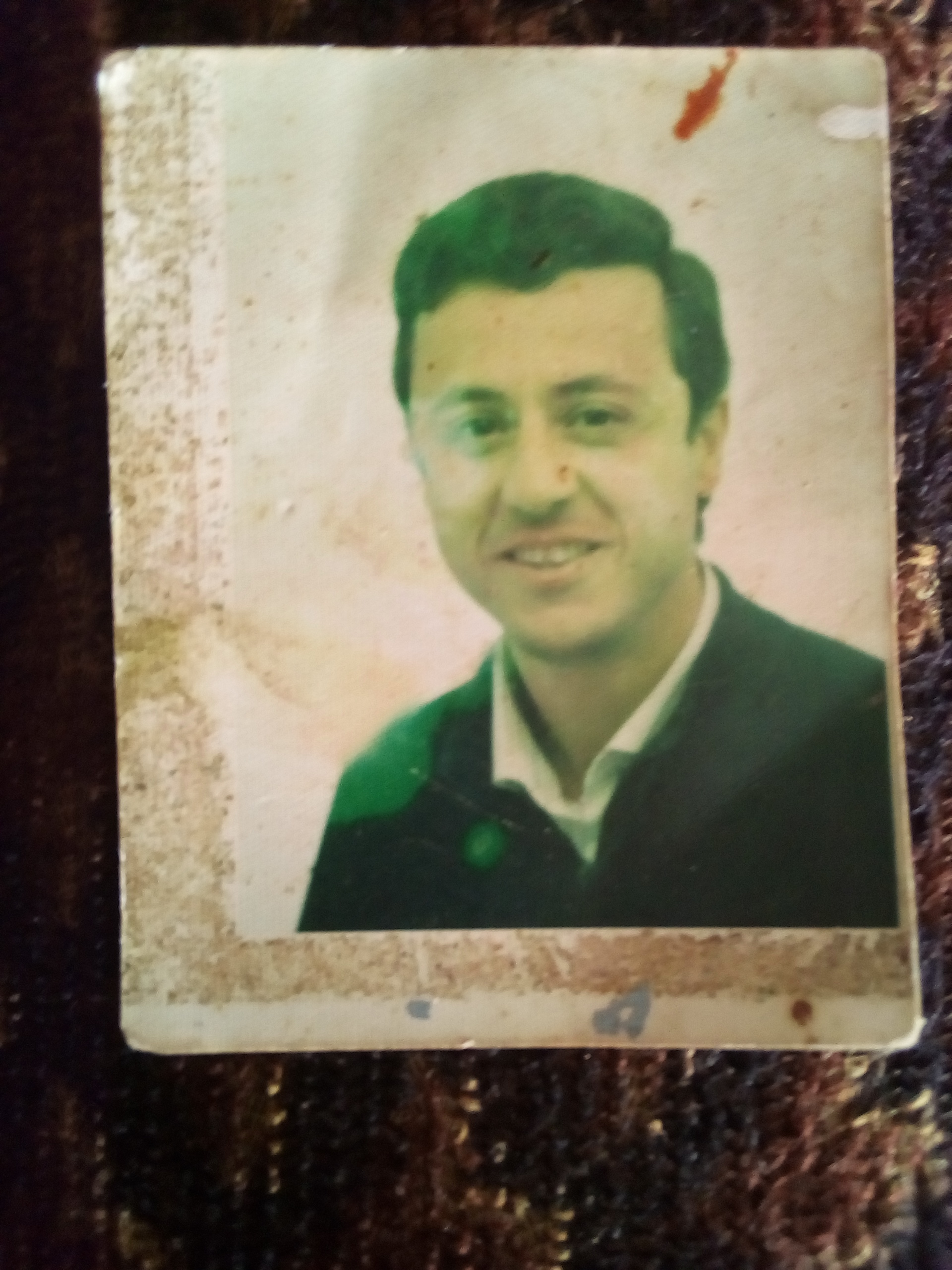 Between 2000 and 2003, Gambians were familiar with a European face among the Presidential security details, who was either serving or acting as protection officer to former President Yahya Jammeh. The man, who claimed to be a retired Captain of the Italian Army-turned restaurant operator, was said to have formed the notorious “jungulers”-Jammeh’s killer squad.

Some of his friends and senior security agents from different security institutions who were close to the then powers that be, indicated to Trumpet Newspaper that they suspected Caso had a hand in the sudden demise of the Gambian-Biafra war veteran, retired Colonel Sam Sillah, a one-time National President of the United Democratic Party (UDP).

They also divulged to the Trumpet that Francesco Caso was involved in the exile and death of his fellow countryman, one of his closest friends and employer late Toni Cartoni, an Italian artist and restaurant owner who had lived in the Gambia years before Caso came into the country.

The self-proclaimed ex-army Captain was born in Napoli, Southern Italy. He came to the Gambia with his fiancée Nina, also from Napoli, in late 1999 via Senegal.

Caso, this medium gathered, left Italy for Africa via Tunisia, Algeria, Morocco, Mauritania and Senegal. He spent some time in Dakar before finally moving to the Gambia where he met a fellow Italian named Antonio (Tony) Cartoni. At the time, Cartoni was operating three restaurants, namely ‘Al Italia, Bamba Dinka and Porto Bello’.

Caso got into business with Cartoni by working for him at Porto Bello with a monthly salary of D2000, according to a friend who had seen his employment agreement. It was at this restaurant that Caso started to build friendship with several senior officials of the Gambia government ranging from Ministers, Police officers, National Intelligence Agency (NIA) operatives, politicians within the then ruling APRC party, to personalities of some opposition parties.

One of his trusted Gambian friends believes Caso was harboring an ulterior motive and by seeing him with senior government officials made him suspicious of his movements and intentions. Within a short period with Cartoni, his friend revealed, Caso framed his employer (Tony) for Pedophilia and accused him of operating a pornographic cinema in the Gambia.

His security friends leaped to the conclusions without proper investigation and not knowing that their friend was hatching a plan to take over his fellow citizen’s buzzing restaurant business. Cartoni was arrested and deported to Senegal where he died a sudden death soon after his expulsion from Gambia.

One of the investigators did confirm that Francesco Caso set Cartoni up with fabricated and false evidence; and he regretted that no proper investigation was conducted into the case. Cartoni was found guilty and bundled out of the Gambia.

A senior NIA investigator spoke to Trumpet about their suspicion of Caso’s involvement in the death of Cartoni. The ex-top investigator revealed that Cartoni was poisoned in Banjul shortly before he was banished. Justifying his assertion, he said Tony Cartoni confined in him (the said officer) that he was poisoned by Caso and was soon “going to die”.

Another finger of suspicion pointed at the erstwhile “European confidant” of ex-President Yahya Jammeh, was the death of late Rtd. Colonel Sam Sillah.

Mr. Sillah, as per the duo’s versions of event, at one point did trust Caso for reasons they couldn’t tell.

A Gambian friend of his confirmed meeting the two (Caso and Sillah) together at Cape Point. He said the way and manner Sam was interacting with Caso made him believed they had a link.

An ex-NIA officer who was very close to Caso would not rule out the theory that Sam was killed by Caso, reasoning that Caso told him on several occasions about his engagements with Sam Sillah.

“At some point, Sam did not trust any Gambian doctor, so Caso was conducting his prescribed injections for him. Sam was always suspicious that Jammeh wanted him dead”, recounts Caso’s friend.

Investigations into how Caso managed to get into the system and became close to Yahya Jammeh, indicated that late Pa Abibou Mbye, renowned Gambian Police detective, introduced him to Abdoulie Kujabie which eventually led Caso to Jammeh.

In a chat with Mr. Kujabie, he confirmed introducing Caso to Jammeh. He disclosed that Caso narrated his “military background” as a retired Captain of the Italian military and an experienced senior VIP [Very Important Person] Protection officer with expertise in explosive detection and management.

After hours of deliberations, Caso convinced Jammeh of his tactics after he promised to provide a bomb detector for the presidential convoy which Jammeh could not wait to get. Caso was immediately hired by Jammeh.

Kujabie further narrated that the two (Jammeh and Caso) agreed to a private contract which was personally negotiated by Yahya Jammeh himself. He said the agreement was for a period within which Caso would be responsible for the training of a Special VIP force.

Thus, the creation of the killer squad started, but according to Kujabie, the sole intention behind the formation of the team was for VIP protection and not for assassinations as they ended up doing.

The training was conducted within the vicinity of Gambia-Cassamance border in the thick forest, hence the cryptogram ‘Jungulers’.

But one of the first batch of soldiers trained under Caso, doubted him as a military man with a retired rank of Captain. “He seems to know nothing; he only plays smart but he is not intelligent at all. Even we trainees knew that he knows nothing about warfare and military tactics”, an ex-jungulers claimed.

Ex-Lieutenant Lalo Jaiteh, then Aide-de Camp (ADC) to President Jammeh recalled seeing Abdoulie Kujabie and Caso with Jammeh at Kanilai but could not tell what was discussed as he was not present at the meeting. According to Jaiteh, he was suspicious and then out of the blue, Caso was introduced by Jammeh as his Private Protection Officer. Jaiteh said the man was never part of the presidential guards’ setup.

“We never allowed him to interfere with the setup of the convoy as he always wanted to. I did have issues with him about the setup; then I suspect[ed] he’s not what he said he was. He was never comfortable with me around because I don’t trust him,” the former army Lieutenant who was alongside others arrested in June 2000, detained, charged with treasonable offences and tried but were exonerated by the Court after four years in Mile II, informed this medium.

Jaiteh who now lives in exile in Switzerland, still wonders how Jammeh trusted Caso to be what he couldn’t do. The former ADC chided: “It’s very clear to all of us that the man (Caso) had no security knowledge at all. He was only bluffing there.”

Contrary to his claims of been a military Captain and VIP protection expert, another top cop who served the Police, NIA, Drug and Narcotic Squad during the First and Second Republics of The Gambia, dismissed that Caso was a military man in Italy.

“I have a dossier on him. He was a “Scout Commissioner” and at times [he] participates in disaster rescue missions as a scout. He was never a soldier neither a security guard to the Pontiff,” he maintained.

His Gambian close friend told Trumpet that Caso was serving as a Fire and Disaster Brigade and that he had no military skills, neither warfare nor VIP protection skills.

But the former NIA Director General Abdoulie Kujabie maintained that he had seen Caso’s photo serving as a Guard to the Vatican.

However, before joining Jammeh’s security team, Caso was able to cook a treasonable allegation against some prominent Gambians including his own Gambian friend whom he trusted a lot. The said Gambian was onetime living in Italy and so fluent in speaking Italian, given him the nickname “Italian”.

After getting closer to Jammeh, Caso wasted no time in creating mistrust within the Jammeh trusted circle, including Lalo Jaiteh who was not long afterwards removed from State House and slammed with charges of plotting to overthrow Jammeh.

Jaiteh, alongside Ebrima Barrow, Momodou Dumo Saho, Ebrima Yarboe, Momodou Marenah and Lieutenant Omar Darboe were accused by Francesco Caso who was the star witness in the trial before the then Nigerian judge of the High Court in Banjul, Hon. Justice Ahmad Belgore. But along the line both Lieutenants Jaiteh and Darboe were discharged and acquitted by the Court before the end of the heated trial.

The rest were also subsequently discharged and acquitted for lack of credibility of evidence as the judge described Caso’s testimony as a ‘bundle of fabrication’.

Lawyer Ahmed Mai Fatty and his client (Ebrima Barrow) were able to establish during the “Trial within a Trial” that Barrow’s confessional statement was obtained as a result of serious torture by security agents at the NIA premises and the Court consequently rejected the statement.

Francesco Caso went into silence after the embarrassment he suffered in Court when his testimony was discredited under intense and extensive cross-examinations by Lawyers Mai N.K. Fatty (for Ebrima Barrow-1st Accused person); Lawyer Ousainou Darboe and Ba Tambadou-who later left the jurisdiction for Arusha- appeared for Dumo Saho.

Then Director of Public Prosecutions (DPP) Chief Emmanuel Akomaye Agim and then Principal State Counsel Emmanuel Olusegun Fagbenle appeared for the State in that trial. They were both to become Chief Justice of The Gambia, respectively.

The lies in Caso’s dessert were unveiled when Lawyer Darboe asked him to differentiate the seniority of a rank of Lieutenant and Captain. Caso said Lieutenant ranks higher than Captain, prompting general laughter and murmuring in the Court. He was ridiculed and shamed for not knowing the seniority of the two military ranks.

Another intelligence officer believes that was the time Jammeh got suspicious about Caso’s lack of qualifications as he bragged, then Jammeh started to distance him.

Caso also became suspicious of his foreseen fall out with Jammeh and decided to pave his way out. He took a leave and then fled the country with wife and son.

But again, Kujabie had a different version as he said Caso told him he could not come back to the Gambia due to issues he had with European authorities.

According to him, Caso told him that, he was listed a mercenary trainer and therefore banned from leaving Europe for a period of time. At the time, Kujabie has fallen from grace with Jammeh and was no longer close or had any close contacts with Jammeh.

He could not help or assist Caso to reconnect with Jammeh again. According to Kujabie, Caso decided to leave the Gambia quietly without meeting Jammeh.