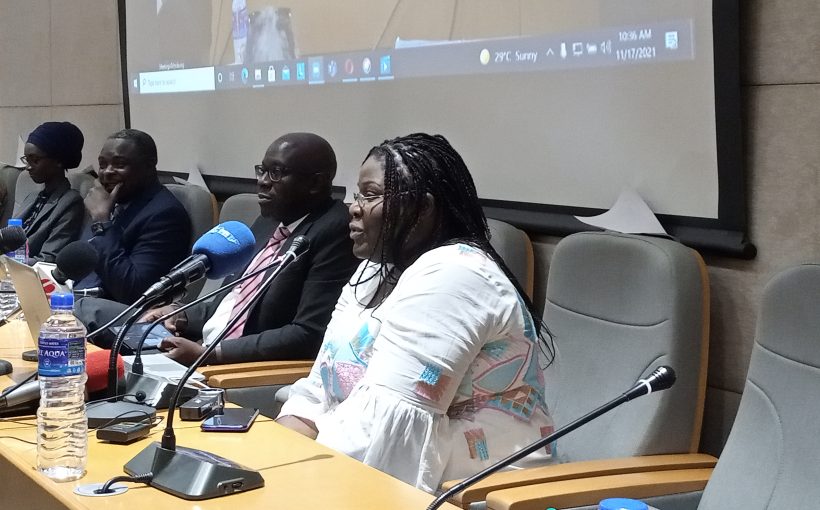 (Banjul, November 17, 2021) – Lawyers and activists from Gambia and around the world today insisted that any recommendations by the Gambian Truth, Reconciliation and Reparations Commission (TRRC) for the prosecution of abusive officials be followed by a process of criminal accountability.

“Whether it is in The Gambia, in another African country, before a special court, or at the ICC, justice must happen and justice will happen,” said Adama Dieng,  Special Adviser to the Prosecutor of the International Criminal Court, in a video message to the forum at the Sir Dawda Kairaba Jawara International Conference Center. “Impunity is not an option.”

That view was echoed by Luciano Hazan, Chair of the United Nations Working Group on Enforced or Involuntary Disappearances, which visited The Gambia in 2017, who, like many other speakers, said that a “hybrid” national-international court might be best tailored to the prosecution of crimes of the Yahya Jammeh era while building capacity in The Gambia.

Stephen Rapp, the former United States Ambassador-at-Large for War Crimes Issues and former chief prosecutor of the Special Court for Sierra Leone said that a future court should be “as Gambian as possible,” but that it could add “international elements as necessary.” That position was endorsed by  Salieu Taal, President of the Gambia Bar Association, who said that Gambians “must own the process,” while adding that internationalization could provide more capacity and give victims a greater role in  trials.

Howard Varney of the International Center for Transitional Justice (ICTJ), who has worked with truth commissions in South Africa, Sierra Leone and Timor-Leste, cited a forthcoming ICTJ report which, he said, showed that only countries which entrusted atrocity cases “to dedicated investigative and prosecutorial mechanisms delivered meaningful justice to victims of serious crimes.”

A number of speakers also addressed the interplay between justice and reconciliation.  “Without accountability, healing and reconciliation will be illusory and the wounds will remain open in The Gambia,” said Fatou Jagne Senghore, Executive Director of Article 19 West Africa. “Many alleged perpetrators continue to hold senior public offices.”

Tiawan Gongloe, President of the Liberia National Bar Association, himself a survivor of torture said that “no one has the authority to tell a victim to forgive. Saying ‘let bygones be bygones’ is to side with the perpetrators.” He said that “accountability is a question of political will” and called on Gambians to vote in the upcoming elections for candidates who promised accountability. He explained that Liberia’s failure, following two brutal civil wars, to implement the 2009 recommendation of a truth commission to establish an Extraordinary Criminal Court had prejudiced his country’s progress.

Gambian victims received support from their counterparts in Chad who, after a 25-year campaign, achieved the conviction in Senegal in 2016 of former dictator Hissène Habré.  “If Hissène Habré could be brought to justice, Yahya Jammeh can be brought to justice too,” said Clément Abaifouta. President of the Chadian Association of Victims, who was forced to dig graves for many of his co-detainees when he himself was a prisoner. “Let us together build an Africa of justice, an Africa free of dictators.”

Sirra Ndow of the African Network against Extrajudicial Killings and Enforced Disappearances (ANEKED) lamented that prosecutions had not yet begun. “The Gambia government’s unfortunate and unfair decision to wait for the TRRC recommendations before possibly considering the prosecution of crimes under Jammeh’s regime has cost us valuable time,” she said. “Some victims have passed away, others live with life-long injuries while seeing those responsible for their pain living freely in their communities. All actors must now do everything to ensure justice is not further delayed.”

Emmanuel Daniel Joof,  Chairperson of the National Human Rights Commission closed the meeting with a plea for justice.  “ The slogan ‘never again’ is rubbish without prosecuting those who bear the greatest responsibilities for gross human rights violations,” he said.

Others who spoke included human rights lawyer Neneh M.C. Cham,  Gaye Sowe, Executive Director of the Institute for Human Rights and Development in Africa (IHRDA), Reed Brody of the International Commission of Jurists (ICJ) and Ayeshah Jammeh of the Gambia Center for victims of Human rights violations.

The Forum was organized by the Gambia Bar Association in association with the IHRDA, the ICJ and the ICTJ who also organized an international consultation of experts  on November 16 to examine the different accountability options for The Gambia,