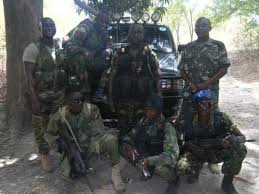 It is now an open secret for the entire world about the atrocities committed by the hit squad of former President Yahya Jammeh known as the ‘Junglers’, who were involved in extra judicial executions, torture and other forms of gruesome human rights violations on the orders of Jammeh. The self-confessions and revelations at the Truth, Reconciliation and Reparations Commission (TRRC) by some of the perpetuators cannot be denied by any human being with their right senses.

But there is another side of the same killer squadron in which they were involved in saving and protecting lives of some Gambians who were marked for death on the orders of Yahya Jammeh. In some instances, the same killers would defied orders to kill, by using their own initiatives to either alert the would-be killed to leave the country or they themselves would smuggled them out of the country.

Trumpet Newspaper is reliably informed of several cases in which the persons marked for death were tipped or smuggled to safety by some junglers. Some among them agreed for the publication of their encounter with the junglers, while others decided to kept mute over it, though they confirmed the story.

Mr. Yusupha Saidy, a Gambian businessman who was arrested by then feared National Intelligence Agency (NIA) by officers led by Lamin Darboe. Yusupha was picked up at his office at Bijilo and detained at the NIA for two nights and later transferred to detention ‘safe house’ in Salagi where he was detained for months.

One night junglers led by Lieutenant Colonel Nuha Badjie, Saul Sambou and others picked him from the said house on the orders of Yahya Jammeh to be executed. His face was covered and driven in a high-speed vehicle heading to Kanilai where he was supposed to be killed.

Upon arrival at the Kanfenda junction leading to Kanilai, they met Major Sanna Manjang who aborted the mission and categorically told his colleagues they have no cause to execute the orders of Jammeh to kill Mr. Saidy whom he described as a patriotic Gambian and a caring person to many Gambians. Manjang, this medium gathered, refused to partake in the planned execution of Saidy. Eventually, he was able to convince his colleagues to drop the idea.

The head of the assassin team, Lt. Col. Badjie, decided to turn down the mission and was able to convinced Yahya Jammeh not to kill Yusupha.

Saidy was later charged before a Banjul Magistrates’ Court but was acquitted and discharged by Magistrate Omar Jabang. Magistrate Jabang on that very day was arrested and dismissed from his job.

When contacted, Mr. Saidy confirmed his arrest and detention for eight months at NIA ‘Safe House’ in Salagi. He said on a particular night the junglers took him away with his head covered and driven to an unknown location. He noticed that at a certain location, they stopped and there was a push and pull between his captors but then he was later brought back to the ‘Safe House’.

On the day of his acquittal by Magistrate Jabang, he received a phone call via a second party who informed him to leave the country immediately or be killed. He said the caller told him the advice came from Colonel Nuha Badjie. He immediately left for exile where he stayed until the fall of Jammeh.

Former Chief of Defence Staff, Lieutenant General Lang Tonbomg Tamba was also marked for death by Yahya Jammeh but the assigned killers refused to execute the mission. Instead, on the very night of the planned execution, while the killers were on the way from Kanilai, he was informed by Lieutenant Micheal Jatta about their mission to have him killed on the orders of Jammeh.

Two prominent Gambians, who manned key positions in the previous government but preferred to be anonymous, confirmed to the Trumpet that they were saved by the Junglers. A former Minister said he was smuggled out of the country by the Junglers; albeit, he refused to mention the name of the said jungler. He was driven via Southern Senegal to safety where he found his way to Guinea Bissau.

A former Director General, who also fled the country, narrated that he was alerted by the junglers. He was told that he was going to be killed and that the assassins’ mission was on the last stage to be executed. He then left the country and he’s still in exile.

A female ex-soldier, who is currently living in Europe, also confirmed to the Trumpet how she was saved  by the assassin team of Yahya Jammeh, after she was ‘marked for death’ for reason best known to Jammeh. She was a Sate Guard soldier who refused to do certain errands for Jammeh which was out her work as a soldier.

In 2016, a man who identified himself as Max Jallow a soldier, in an interview with one of the online radios said he was saved by Major Sanna Manjang. According to him, Manjang alerted him about the mission of his team to liquidate him as he was suspected to be an informant for one of the Gambian online news outlets. He managed to escape to safety.

Ex- Major Alieu Sowe, a ‘classmate’ of Major Sana Manjang in the Army, revealed that Manjang had always advised him to be on alert in case their killer team was coming for him. Major Sowe was very close to Jammeh, but was a victim on two occasions as he was detained for months without charge. Manjang told me ‘any day I called you with a private number and said class, hmm hmmm hmmmm, know that we are coming for you’.

Major Sowe was dismissed from the Army by the Barrow government without any justification.

According to another sources, the late Major Kalifa Bajinka was also saved by the junglers back in 2006 in the aftermath of the 21 March, coup plot hatched by then CDS late Colonel Ndure Cham. Bajinka was able to escape from his captors; he went to Senegal before eventually settling in United Sates where he lived until his untimely demise sometime in mid May 2017. However, Trumpet is yet to verify that information.