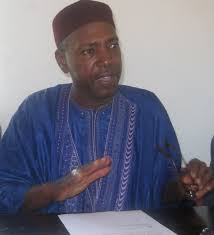 It is over one year and four months since Ousman Rambo Jatta, the first deputy party leader of Alliance for Patriotic Re-Orientation and Construction (APRC), accused Tourism Minister Hamat NK Bah, the leader of National Reconciliation Party (NRP) “as a sneak and betrayer of coalition government during the December 2016 political deadlock” known as the impasse.

Few days later, Mr. Bah held a press conference in which he promised to fire back at the allegation and vowed that the person behind the whole scenario will come out to clear the air surrounding the allegations against him.

The said allegation from Rambo Jatta was revealed at an APRC Political rally at Brikama in late January 2020. Mr Jatta described Minister Bah as a disgrace to the Gambians.

Rambo said, “Then I was working at State House when Hamat Bah came to see President Jammeh, but was unable to meet with Jammeh and that was a humiliation for him as an elderly person. Hamat Bah always tell people he played an important role during the political impasse, is not true. Hamat Bah betrayed the coalition government during the impasse and left the country only for him to come back to lobby for Jammeh to appoint him as vice president”

Rambo added, “He was seriously disappointed, humiliated and embarrassed because his wishes were never granted.

Mr. Jatta further warned the Tourism Minister to keep quite otherwise he Rambo will expose him with documented evidence.

At a press briefing, Mr. Hamat Bah described the remarks by APRC deputy leader as ‘lies and misleading’. He emphatically denied any request to meet with former president Jammeh during the political impasse neither did he lobbied for vice presidency.

“How can I ask for a job from a government which was already dead and buried? It was on a Christmas Day 25th December 2016 I received a call from somebody who said he is a Pastor and said he was calling me for an urgent matter. When I was approached for the position, I rejected the offer and told him to tell ex-president Jammeh that we have a place for him to go to avoid bloodshed.”

However, Mr. Bah did not mentioned the name of the said pastor but added that he does not want to talk much about the issue but if Rambo Jatta wanted he Hamat have more to say but will wait for the person concern to make a public statement about the issue.

Minister Bah vowed that the said pastor will come out to debunk the lies of Rambo and warned Rambo and APRC to think about the revelations coming from the Truth, Reconciliation and Repatriations Commission (TRRC).