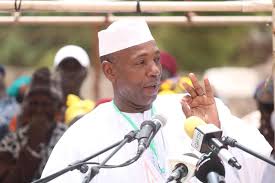 Minister Bah was speaking during President Barrow’s ten days meet with the peoples’ tour and did not mind his words against Suku Singhateh.

Suku Singhateh was a National Assembly member for Lower Badibou under former ruling APRC party. He switched sides to the United Democratic Party (UDP) after APRC lost elections to a coalition of parties led by President Barrow in December 2016.

Of recent he abandoned UDP and joined President Barrow’s new party and was on tour with the president when Minister Bah castigated him amid thousands of people.

Minister Bah deliberately call Suku out pointing his fingers at him and chastise him of using “Bandinya fassa” in politics.