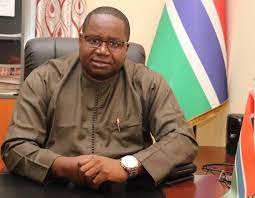 THE HONOURABLE SPEAKER OF THE NATIONAL ASSEMBLY,
THE HONOURABLE CHIEF JUSTICE,
HONOURABLE MINISTERS,
MEMBERS OF THE DIPLOMATIC AND CONSULAR CORPS,
INTERNATIONAL PARTNERS,
REPRESENTATIVES OF CSOs AND VICTIM LED ORGANISATIONS
LADIES AND GENTLEMEN,
We are gathered here today for the launch of the Government’s Whitepaper on the Report of the Truth Reconciliation and Reparations Commission. This a major stride in our transitional justice process and comes on the heels of the conclusion of the work of the Truth Reconciliation and Reparations Commission.

The White Paper the Government will be releasing today broadly sets out Government’s roadmap for the implementation of the TRRC Report. In preparing this white paper the Government opted for a broad based consultative and inclusive process so as to get the widest views possible, including the views of persons with disabilities and traditionally marginalised groups. The Government through the Ministry of Justice made a call for position papers from the general public on the report of the TRRC on the 6th of April 2021. Furthermore, the Ministry of Justice in a bid to enhance the consultative process created two standing consultative bodies:
The MOJ-CSO Platform which is a standing consultative forum for the Government and Civil Society organisations to constantly interface on matters relevant to the preparation of the White Paper. It is intended that this body will continue to meet periodically throughout the process of implementation of the TRRC Report; and
The MOJ-VICTIMS Town hall, which is a consultative forum for the Government, victims and victim led organisations to discuss issues relevant to the implementation of the TRRC Report in a victim centred approach.
On the 9th of May 2022, the Ministry of Justice in collaboration with key partners organised a 3-day National Discussion on the TRRC Report with the aim of popularising the findings and recommendations, dispelling misconceptions on the TRRC Process and the implementation process as well as receiving stakeholder views on the findings and recommendations guided by the thematic areas. The participants were split into 5 thematic working groups and at the end of the 3-day conference each produced a report containing reactions to the recommendations and proposals for implementation.
The Ministry of Justice also implemented other innovative forms of consultation such as reaching out directly to certain traditionally marginalised groups through its outreach team as well as one on one informal consultations with key victim-led organisations. These informal consultations paved the way for genuine and unfiltered consultation which not only provided deep insights into the public expectation but also helped provide context for the implementation.
These reports, feedback as well as the position papers received from members of the public, civil society organisations, victims, educational institutions and international partners were an important resource in preparation of this White Paper. The White Paper therefore reflects very wide and diverse views of all stakeholders in this important process.
During the Commission’s sitting and in addition to the work on the whitepaper, the Government carried out certain key interim measures. In the area of accountability, the Government initiated the criminal proceedings against 9 former NIA top brass for the murder of Solo Sandeng and the torture of some supporters of the United Democratic Party. Judgment is expected to be delivered in that case in the days ahead. The Government also initiated criminal proceedings and secured a guilty verdict against Yankuba Touray for the murder of Ousman Korro Ceesay. In addition, the Government is collaborating with the United States, Switzerland and Germany in the prosecution of perpetrators identified by the TRRC in its enquiry.
In the area of reparations, the Government, noting the importance of making reparations available for Victims commenced consultations through a victim led-process for the development of a new law that will create an independent body to serve as a successor body to the TRRC’s reparations committee. These consultations are ongoing and it is hoped that this law will be ready for tabling before the National Assembly at its next session.  The above are a clear demonstration of Government’s commitment to the TRRC process.
It is important to note that Government has committed a considerable amount of effort into this White paper and believes it constitutes a clear and comprehensive framework for the implementation of the TRRC Report as well as for the attainment of the objectives of the transition process.
The Government acknowledges the importance of making information on the implementation process widely available in order to ensure broad participation. The Government intends to implement a robust communication strategy that will close the information gap, enhance access to information and ensure the popularisation of the TRRC Report and Government White Paper to the grassroots.
Thank you for your kind attention.
Warmest regards,
Prince Bubacarr Aminata Sankanu